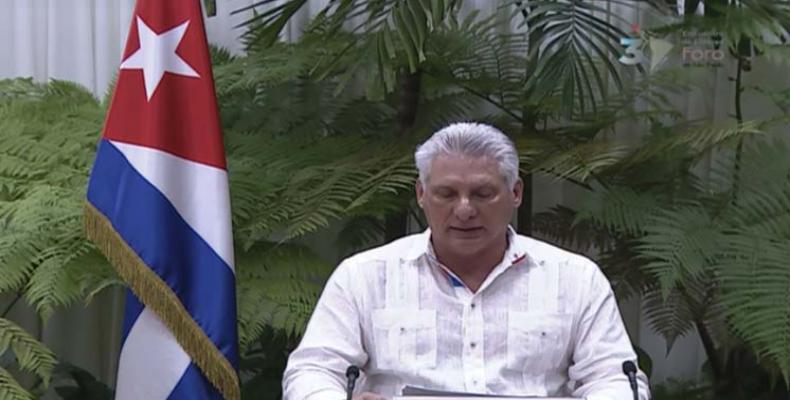 Havana, July 28 (RHC) The President of Cuba, Miguel Díaz-Canel, called on Tuesday for the unity of progressive movements during his appearance at the virtual meeting of the Sao Paulo Forum, on the occasion of the 30th anniversary of the organization.

Thirty years ago, the doomsayers of despair, the enthusiasts of the market, and the speakers of the single-mindedness made the world believe that history was over, and here we are, the unyielding Advocates of Hope, and of another possible World," said the President.

Accompanying Díaz-Canel at the meeting were José Ramón Machado Ventura, second secretary of the Central Committee of the Cuban Communist Party, and Bruno Rodríguez, foreign minister of the Caribbean nation.

"This celebration allows us to thank the support of the Forum to Cuba and the campaign developed this year for the end of the blockade", acknowledged the Head of State.

The President described the founding of the Forum as a unitary feat, on the initiative of the historic leader of the Cuban Revolution, Fidel Castro, and former Brazilian President Luiz Inácio Lula Da Silva.

The Cuban President also recognized the efforts of Lula and the leaders of the Brazilian Workers' Party at the head of the Executive Secretariat of the progressive platform.

Diaz-Canel recalled that the virtual meeting coincided with the 66th birthday of a very dear friend of Cuba, described by Fidel as the Best Friend of Cuba and all struggling peoples: commander Hugo Rafael Chavez Frias.

He added that the Invincible example of Chavez invites us to continue the struggle with determination and optimism, convinced that there are no obstacles no matter how difficult they may seem, that could not be overcome by our United peoples is the case today for Venezuela Nicaragua and Cuba.

The meeting brought together the Nicaraguan President, Daniel Ortega, and his Venezuelan counterpart, Nicolás Maduro.

Since its birth, the Sao Paulo Forum has stood out as a scenario of convergence, debate, and joint action, born out of the Meeting of Leftist Political Parties and Organizations of Latin America and the Caribbean, held in 1990.