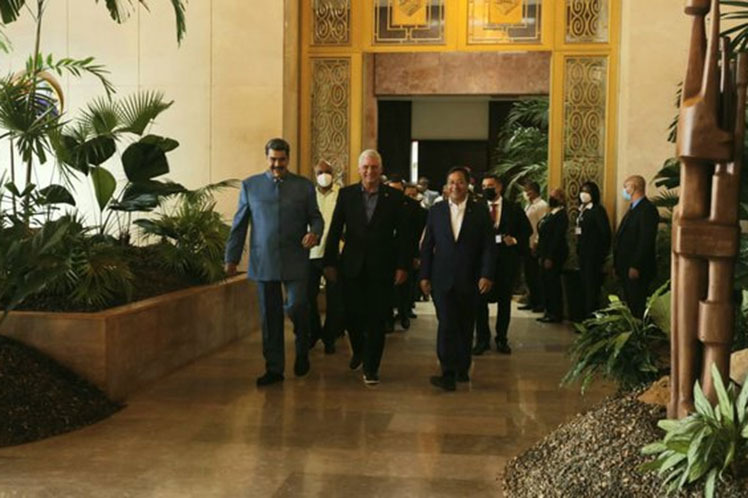 Havana, May 27 (RHC)--) Cuban President Miguel Díaz-Canel welcomed the leaders participating in the 21st Summit of Heads of State and Government of the Bolivarian Alliance for the Peoples of Our America-People's Trade Agreement (ALBA-TCP).

At the Palace of the Revolution, the venue of the event, the President, together with Foreign Minister Bruno Rodríguez Parrilla, welcomed the participants, among whom one of the first to arrive was the executive secretary of that integrationist platform, Sacha llorenti.

They also warmly greeted the presidents of Bolivia, Luis Arce Catacora, Venezuela, Nicolás Maduro, and other presidents from the ALBA-TCP countries, including Nicaragua, St. Vincent, and the Grenadines, Grenada, Dominica, Antigua and Barbuda, St. Kitts and Nevis and St. Lucia.

This meeting of presidents, prime ministers, and high-level leaders of the group is to share common development strategies and analyze the regional political situation, according to the Cuban Ministry of Foreign Affairs.

This bloc was founded in 2004 at the initiative of Fidel Castro and Hugo Chávez, then presidents of Cuba and Venezuela, as a response to the neoliberal project that Washington intended to impose on the continent and based on solidarity, collaboration, and complementation among its member countries.