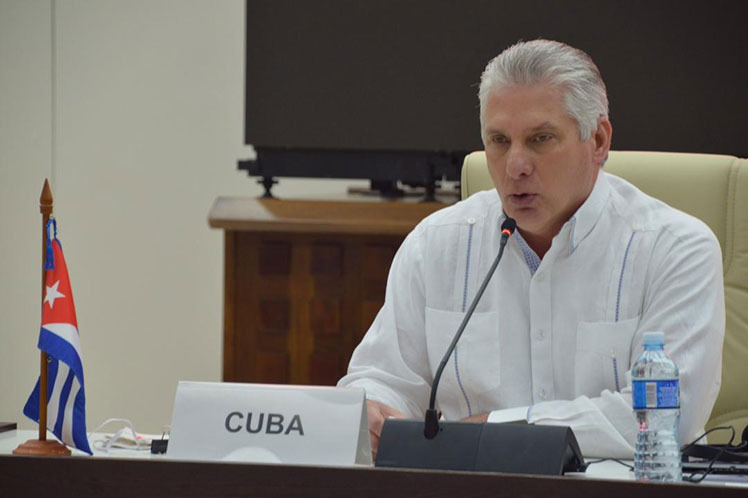 Havana, December 14 (RHC)--Cuban President Miguel Díaz-Canel called for solidarity and regional cooperation during the 18th Summit of the Bolivarian Alliance for the Peoples of Our America-People's Trade Agreement (ALBA-TCP) held virtually on Monday.

In the meeting, the President reiterated the island's willingness to expand collaboration in public health with the members of the Alliance through epidemiological advice and exchange of experiences in dealing with the Covid-19 pandemic.

President Díaz-Canel ratified the firm support to the brotherly Nicaraguan people who, under the leadership of the Sandinista National Liberation Front and the leadership of Commander Daniel Ortega Saavedra, have worthily defended the remarkable achievements made in recent years, despite the threats, sanctions, and interfering actions of the United States Government.

He also expressed joy at the reincorporation of the Plurinational State of Bolivia into this Alliance on a day as significant as this. "Once again, the heroic Bolivian people have made history by resuming the path of building a more just, inclusive, and humanist society," he said.

As another essential turning point for the Bloc peoples, the President considered the indisputable victory of the Great Patriotic Pole in the legislative elections held on December 6 in Venezuela, which reflects the widespread support for the Bolivarian and Chavista revolutionary process, led by comrade Nicolás Maduro Moros.

"We have lived a very complex and challenging year," reflected President Díaz-Canel when he recalled how the COVID-19 pandemic had forced the ALBA member countries to develop mechanisms to adapt to a new reality that imposes immense challenges on its health systems and economies.

At the same time, the President recognized that the current scenario in which our nations are living requires solutions and creative approaches "that prioritize cooperation and solidarity, both within countries and at the regional and international levels.

Referring to the current scenario in the region, in which the unilateral coercive measures applied by the United States Government against some of the countries of the Alliance, such as Venezuela, Nicaragua, and Cuba, are accumulated and reinforced, President Díaz-Canel recalled that this is not a new way of acting.

The Cuban people -he pointed out- have clearly and forcefully rejected the most recent attempts to manufacture, with the help of social media and the media powerhouses at the service of imperialism, unconventional war actions to precipitate the so-called change of regime and the destruction of the Revolution.

Finally, President Díaz-Canel called on all the members of the Alliance to advance in the implementation of the work plan in the pandemic stage, and on the proposal of an Economic, Commercial and Financial Agenda approved last June during the "High-Level Conference on Economy, Finance and Trade in the framework of COVID-19".