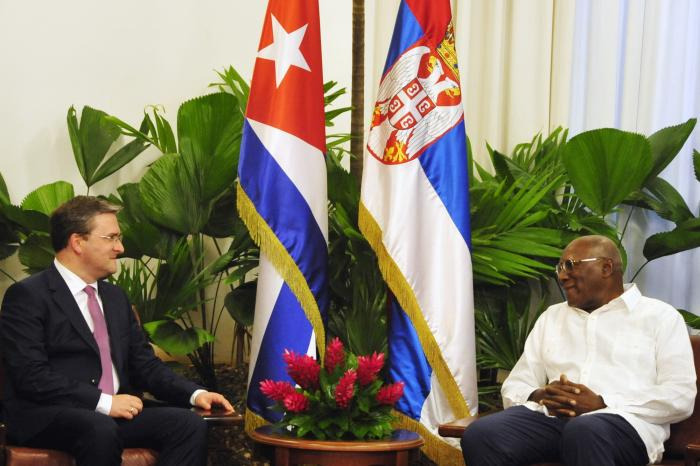 Havana, August 5 (RHC)-- Cuban Vice President Salvador Valdes Mesa on Thursday conveyed to Serbia's Minister of Foreign Affairs Nikola Selakovic, an affectionate greeting from Army General Raul Castro Ruz and the President of the Republic, Miguel Diaz-Canel Bermudez, to the people and authorities of his country.

"It is an honor and a pleasure to receive you on behalf of our government," Valdés Mesa told the Serbian Foreign Minister, who is visiting Cuba in the year that marks the 120th anniversary of establishing bilateral relations. He said his stay "is important to continue strengthening our relations."

We have always held our historical relations in the highest esteem, Valdés Mesa added, expressing Cuba's admiration for the Serbian people, a country, he said, that must preserve its territorial integrity.

Foreign Minister Nikola Selakovic described the meeting as a great honor and privilege and extended the warmest greetings of Serbian President Aleksandar Vucic to the Cuban leadership.

On Thursday, the willingness to continue expanding bilateral cooperation between Cuba and Serbia was also ratified in official talks between the foreign ministers of both nations, Bruno Rodriguez Parrilla and Nikola Selakovic.

In the cordial meeting held in the protocol room of El Laguito, they highlighted the positive state of relations and discussed issues of mutual interest, such as cooperation in the fields of biotechnology, culture, sports, and tourism; as well as the identification of other sectors of common interest. They also discussed the complex international situation.