Colombians in solidarity with Cuba unanimous call to end the blockade 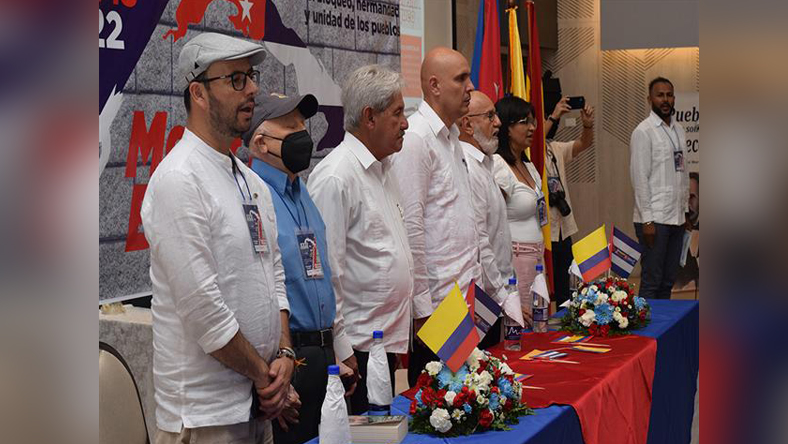 Barranquilla, Nov 12 (RHC) The XXXI National Meeting of the Colombian Movement of Solidarity with Cuba (MCSC) held in this city is another demonstration of the rejection of the U.S. blockade against the island.

At the official opening of this meeting on Friday night, the Cuban ambassador to Colombia, Javier Caamaño, representatives of the different solidarity houses that make up the Colombian Movement of Solidarity with Cuba, and a broad representation of various progressive political forces in Colombia took part.

Congressmen of the Historical Pact, such as Gabriel Becerra, from the House of Representatives, militants of Colombia Humana, Polo Democrático Alernativo, Colombian Communist Youth, and even delegates of the Youth of the United Socialist Party of Venezuela, among others, attended the opening of the Meeting.

Before the inauguration of the event, the National Director of Epidemiology of Cuba’s Ministry of Health, Francisco Durán, a special guest, gave a lecture on the achievements of the country in the fight against the Covid 19 pandemic.

He emphasized that as a result of the blockade and given the insufficient resources to acquire vaccines as soon as they were discovered, Cuban authorities created an entire strategy in terms of achieving their products to immunize the population against the SARS-COV-2 coronavirus.

As a result, Cuban science, promoted by the leader of the Revolution Fidel Castro, obtained its vaccines and medicines to face the disease and applied protocols also designed in Cuba to contain the pandemic.

All this resulted in the country reaching lower rates of contagion and deaths than other Latin American nations and the world.

At the solidarity meeting, Ambassador Caamaño recalled that, during the pandemic, the government of then President Donald Trump tightened the economic, commercial, and financial blockade, imposed more than six decades ago by the United States, with the application of 243 additional measures to make the Cuban people suffer even more.

He thanked the Colombian Movement of Solidarity with Cuba for its struggle in favor of the Cuban people and its revolutionary process.

The pro tempore coordinator of the Colombian Movement of Solidarity with Cuba, Nury Utria, said that from Casa Caribe in Barranquilla the struggle will continue for the defense of Cuba, against the blockade, and to demand its removal from the list of countries sponsoring terrorism, in which it was unjustly included because of its unconditional support for peace in Colombia.

From Cuba, the vice president of the Cuban Institute of Friendship with the Peoples Victor Gaute thanked the Movement for its 31 years of uninterruptedly support to the Caribbean Island, especially in complex moments as in the accidents in the Saratoga Hotel, the Supertanker Base in Matanzas and more recently, after the passage of Hurricane Ian.