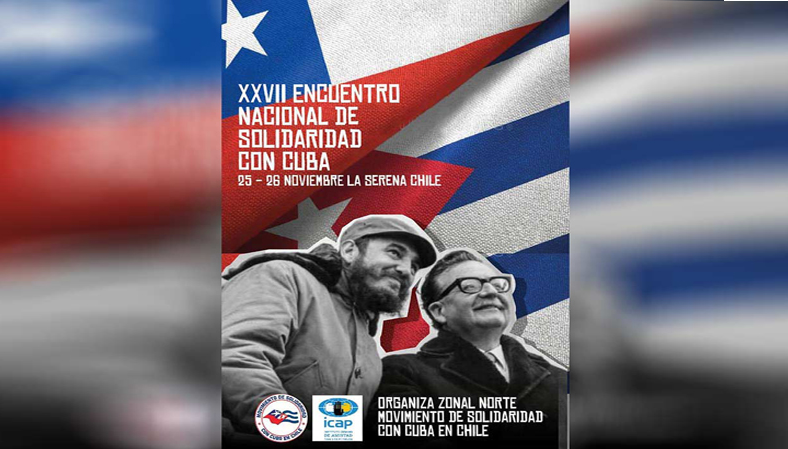 La Serena, Nov 25 (RHC) The 27th National Meeting of Solidarity with Cuba, which begins today in Chile, will pay tribute to the historic leader of the revolution Fidel Castro, on the sixth anniversary of his physical disappearance.

The president of the Metropolitan Coordinator of Solidarity with Cuba, Dr. Carlos Lagos, said: "I believe that Fidel, besides being the guide of the revolution and an exceptional statesman, became the leader of all the peoples who fight for their freedom".

In a dialogue with Prensa Latina, he recalled that the commander-in-chief freed Cuba from the imperialist yoke and went further by managing to transform society into a new, socialist society, where the human being is the fundamental center of life.

"Personally, I was lucky and honored to be able to live in Cuba, where I studied medicine at the Salvador Allende Hospital and was able to shake the Commander's hand a couple of times, thanks to the work of solidarity," said Lagos, who recently visited the Fidel Castro Ruz Center in Havana.

Asked about the meeting, he said that these events began in 1992 and have been like the backbone of the national solidarity movement.

Every year we held it uninterruptedly until 2019 when we had a social outbreak and it could not be done, then came Covid-19 and we took it up again in 2021, but virtually, he said.

At this moment it is of vital importance once we are already coming out of the pandemic and we can hold a face-to-face meeting in which we are going to meet again with colleagues from Arica, in the north, to Puerto Montt, in the south, he said.

Lagos stressed the importance of these events to share work experiences, particularly when imperialism is intensifying its policies of aggression and interventionism and the blockade of more than 60 years.

This economic, commercial, and financial siege is an extraterritorial criminal act that has been placed in the dock at the UN for many years and has been rejected by all the peoples of the world and, of course, by our country as well, he declared.

For the doctor, the discussion and resolutions of the meeting will be very important for the next two years, in which we will have to raise again the banners of brotherhood with the government and the people of Cuba, he concluded. (Source: PL)