President Cuban Parliament arrives in Russia on an official visit 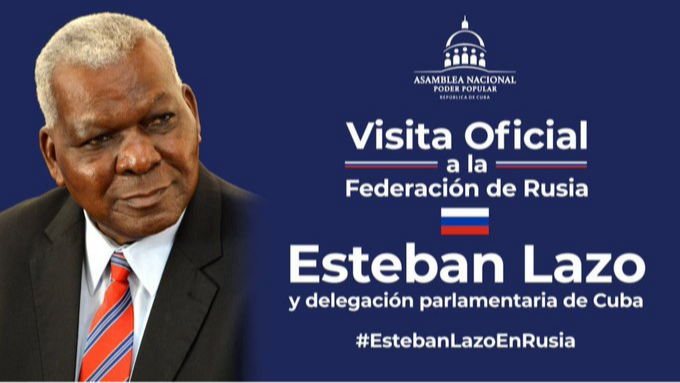 Havana, Nov 29 (RHC) Member of the Political Bureau of the Central Committee of the Communist Party of Cuba Esteban Lazo Hernandez, president of the National Assembly of People's Power and the Council of State, arrived Tuesday in the Russian Federation for an official visit.

The head of the Cuban Parliament was received by Konstantin Iosifovich Kosachev, vice-president of the Federation Council of the Federal Assembly of the Eurasian nation; and Julio Antonio Garmendía, Cuban ambassador to Russia.

After his arrival, they held talks in the Protocol Hall of Honor of the Moscow airport.

Lazo Hernandez will carry out a wide-ranging work program. He will hold exchanges with the heads of both chambers of the Federal Assembly of the Russian Federation and with other party and government representatives, as well as visit places of historical and cultural interest, among other activities.

The Cuban delegation is also made up of deputies Yolanda Ferrer Gómez and Félix Martínez Suárez, heads of the International Relations and Economic Affairs committees of the National Assembly, respectively; Magda Ileana Pérez Matos, vice chairwoman of the Industry, Construction and Energy Committee, and Marta Hernández Romero, coordinator of the parliamentary committees.

Russia is the first stop of a tour by the president of the Cuban legislature, which will include Belarus and Turkey, where he will also strengthen parliamentary ties with those countries (Source: Radio Reloj).