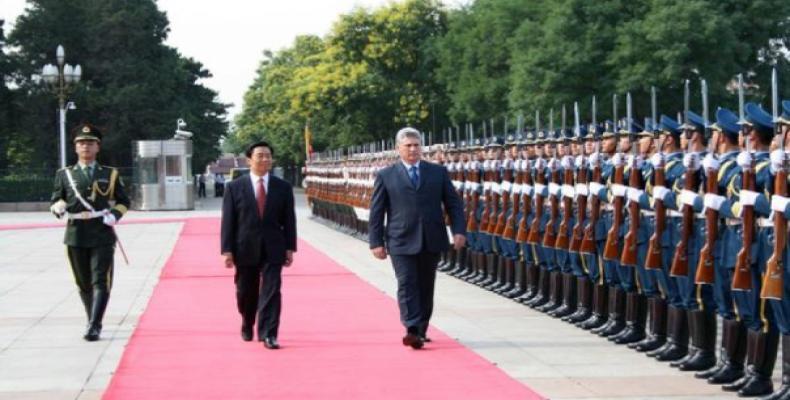 Beijing, September 2 (RHC) -– Cuban First Vice President Miguel Diaz-Canel is in Beijing to participate in commemorations for the 70th Anniversary of China's victory over fascism and the end of World War II.

The visit by the top Cuban official also takes place to commemorate the 55th anniversary of the establishment of diplomatic relations between China and Cuba. Granma newspaper says the visit is an appropriate opportunity to ratify the excellent bilateral and strategic links between the two countries.

Diaz-Canel is heading a delegation made up of Deputy Foreign Minister Rogelio Sierra and Cuba's ambassador to the People's Republic of China, Alberto Blanco Silva.

The Cuban first vice president met on Tuesday with Chinese Vice President Li Yuanchao, who praised the achievements reached by the Caribbean nation. He said that Cuba is in the spotlight of the international community given its policies aimed at updating its economic model and the recent reestablishment of diplomatic relations with the United States.

Li congratulated Cuban authorities for their achievements which, in his personal opinion, have helped to advance on the road to a full and more dynamic unfolding of commercial and economic areas.

The commemorations for the 70th anniversary of China's victory over fascism and the end of the Second World War includes a military parade, which has for the first time, the participation of guest representatives of foreign armies, including the Cuban Revolutionary Armed Forces.