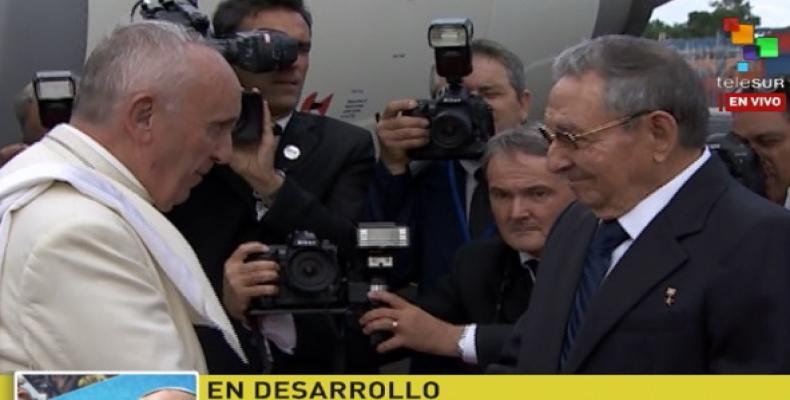 Havana, September 19 (RHC)-- Pope Francis arrived in the Cuban capital of Havana at approximately 4 p.m. Saturday afternoon to begin a pastoral visit to the Caribbean nation. The Pontiff was officially welcomed at the airport by Cuban President Raul Castro, along with Cardenal Jaime Ortega and other religious and government officials.

During his stay in Cuba, Pope Francis will conduct an intense program that will include Masses in Havana, Holguin and Santiago de Cuba.

Pope Francis will meet with President Raul Castro, as well as Cuban bishops and religious leaders. During his stay, the Pontiff will also hold meetings with young people and a number of families.

His activities in the country will be broadcast live on local radio and television, and over 1,000 journalists from more than 30 countries will be reporting his activities to the world.

His Holiness Pope Francis is the third Pope to visit Cuba in less than 20 years. His pastoral visit comes at a time when Cuba and the U.S. have recently re-established diplomatic relations. And the Pope's efforts to help in negotiations between Cuba and the U.S. have been duly noticed. For his efforts, Pope Francis receives the appreciation of the Cuban government and people.