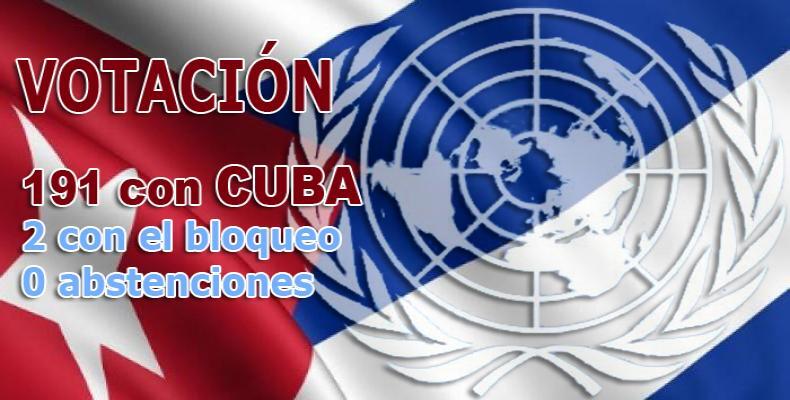 United Nations, October 27 (RHC)-- Cuba achieved an overwhelming victory at the UN General Assembly on Tuesday with the vote in favor of ending the U.S. blockade: 191 votes in favor, two against -- the United States and Israel -- and no abstentions.

Before the vote, which marked the 24th time in a row that the UN General Assembly approves a similar resolution urging the lifting the U.S. blockade of Cuba, over 30 speakers, representing countries and regional blocks, took the floor to express their support for Cuba and against the U.S. policy.

While all speakers hailed the re-establishment of diplomatic relations between Washington and Havana, they described the U.S. blockade as the main impediment to Cuba's economic and social development, as well as to achieve fully normalized relations between the two neighboring countries.

The UN representative of Jamaica, speaking for the Caribbean Community (CARICOM), highlighted Cuba's solidarity and cooperation with the 14 member grouping in several areas. The representative of India praised Cuba's advances over the past several decades despite the U.S. blockade, particularly the country's high Human Development index, which has earned the Caribbean state high prestige internationally.

Venezuela's UN ambassador called on the U.S. government to stop interfering in the internal affairs of Latin American and Caribbean states, as well as refrain from imposing unilateral sanctions on other sovereign states as a way to further U.S. interests.

The representative of the Solomon islands, speaking on behalf of his country and Nauru, thanked Cuba for its cooperation over the past three years, particularly in the field of health. China, for its part, called on Washington to lift the blockade, arguing that constructive dialogue and negotiation is the best way to resolve conflicts between states.