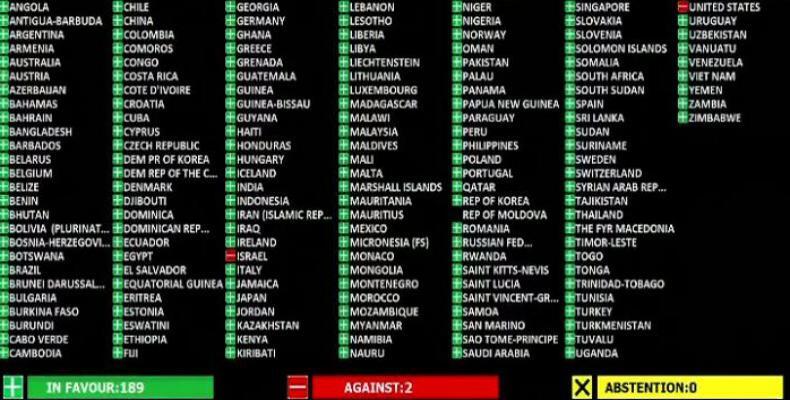 This was the 27th consecutive time, since 1992, that the world body approves such a resolution.

Prior to the vote, eight amendments introduced by the U.S. government to confuse UN member states were rejected, one by one. The only three votes in favor of the U.S.-proposed amendments were those of the United States itself, Israel and Ukraine.

Shortly before the vote, Bruno charged that despite all the pressure exerted on sovereign nations and the amendments introduced by the U.S. government to create confusion and boycott the debate and approval of the resolution against the U.S. blockade, he was confident that the resolution would be passed as usual -- with the support of the majority of UN member states represented at the General Assembly.

Senior representatives of national governments, regional blocs and international organizations took the floor during Wednesday's and Thursday's sessions, to explain their vote in favor of the Cuban-sponsored resolution and against the U.S. blockade, urging Washington to listen to the claim of the vast majority of the international community represented at the UN General Assembly, thus correcting this wrong by repealing, once and for all, the economic siege of Cuba.

They rejected the extraterritorial nature of the U.S. blockade and the obstacles it raises to Cuba's normal economic, trade and financial relations with the rest of the world.

The representative of Grenada was one of those who took the floor. She rejected the U.S. blockade and renewed her country's support for Cuba.

She pointed to the role that multi-lateralism and nations of the world are to play toward achieving fully normalized relations between the United States and Cuba.

The representative of the European Union also took the floor Thursday at the UN General Assembly to explain the vote of all EU members in favor of the resolution, urging the lifting of Washington's blockade of Cuba.

He regretted the new restrictions imposed by the current U.S. administration to further tighten the blockade. He said: “These sanctions affect the economic interests of the European Union, since they violate world trade norms and regulations.”

Representatives of Australia, Argentina, Indonesia, Peru, Argentina, Uruguay and Iran, among others, also took the floor to express their countries' support for the Cuban people's cause against Washington's nearly sixty years-old blockade policy.