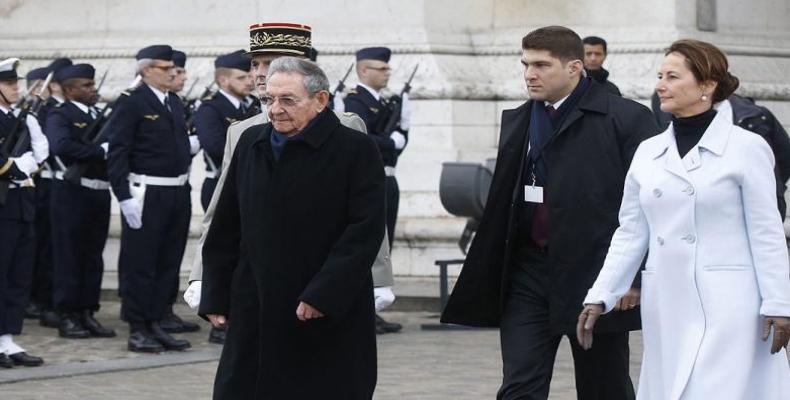 During a meeting in Paris with Cuban Embassy staff, the Mission to UNESCO, and representatives of Cuban organizations in Paris, the president referred to the importance of the outcome of negotiations with the Paris Club on Cuban debt.

We have taken a step that frees us from the bonds that made it difficult for our international trade to acquire credits for investment, taking advantage of the opening that is expressed in this regard in the new investment law, he said.

Raul Castro fulfilled a busy schedule during his two-day visit, which ended Tuesday evening in Paris.

French President Francois Hollande said that a a new page in the relations between the two countries has been opened. He referred to the signing of a bilateral economic accord in sectors such as tourism and transportation, while he noted that France is among the major trading partners of the island.

He stressed that all this was made possible by the agreement reached last December 12th between Cuba and the Paris Club concerning Cuba's debt.

For his part, Raul Castro stressed that the two countries are linked by historic and cultural ties. This is the first State visit of a Cuban president in France and a member from the European Union. The Cuban leader said it reaffirms the excellent state of relations and reflects the common will to strengthen political dialogue at the highest level.

Raul noted that the bilateral accords that were signed represent important mechanisms set for the production, monitoring and promotion of trade and economic cooperation and investment links.