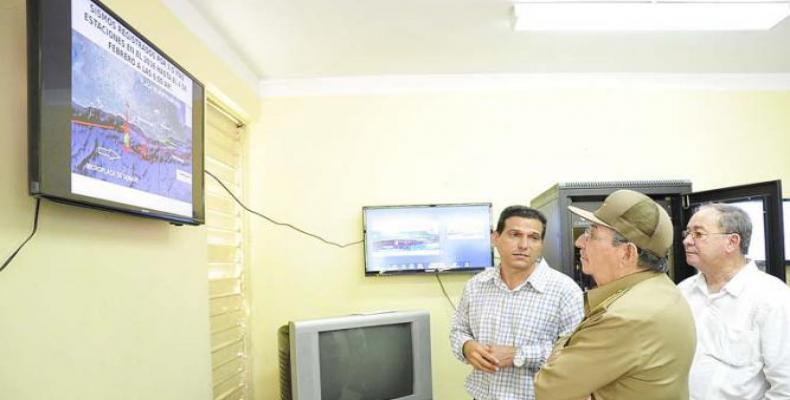 Havana, Feb 20 (Prensa Latina) Cuban President Raul Castro visited the National Seismological Research Center, where he learned firsthand about the anomalous situation in the eastern territory since early January, when about 1,463 seismic events have been reported. Of that total, nearly 42 earth tremors were perceptible by people, Granma newspaper reported.

Accompanied by the first secretary of the Communist Party in the province, Lazaro Exposito, the Cuban leader was welcomed on Friday in the Santiago de Cuba-based institution by Doctors Bladimir Moreno and Enrique Arango, director and deputy technical director, respectively.

He exchanged with them for almost two hours about monitoring earthquakes, the technology used for those purposes and the way in which the signal is received and the analysis is performed.

During the visit, he asked about the danger of a tsunami in the area, and the studies conducted about this issue; the history of the high-intensity seisms reported in the country´s eastern region, the characteristics of the tectonic plates where the recent earth tremors are taking place, and the measures to reduce damage from a powerful earthquake.

He also stated that the work done has been very good, and urged to monitor the psychological problems triggered by natural disasters of this kind. He called to continue emphasizing this matter on the earthquake-resistance construction regulations, not only in buildings constructed by the State, but also those built by people with their own efforts.

Raul Castro also advised to keep the plans to face disasters updated and to inform all people in Santiago de Cuba about them, as well as to continue studying the current situation, according to the source.

About this issue, Exposito stated that daily communication, face to face with the population, who has behaved with maturity and discipline, has been fundamental in this situation, he added.

When leaving the institution, the Cuban president congratulated the employees for their hard work in recent years, and urged them to keep the population informed.