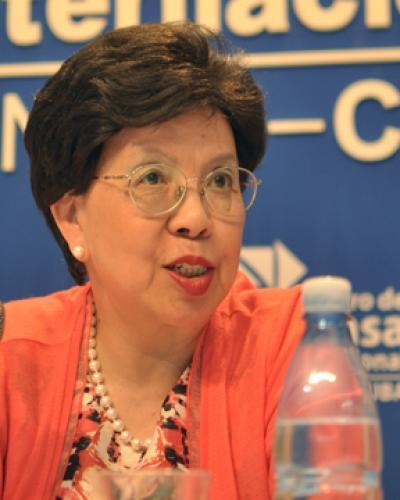 Geneva, May 25 (RHC-PL) -- Cuban Health Minister Roberto Morales and the Director-General of the World Health Organization (WHO) Margaret Chan held a meeting in Geneva in the context of the 69th World Health Assembly.

During the exchange, Chan acknowledged the contributions of the Caribbean country to the training of their professionals, a training which is reflected in their work, including their technical diligence and high level of humanism.

Chan also described as "admirable" the Cuban method of teaching medicine with human and social sensibility, and with a desire to foster a greater commitment to the community.

Those values have been also acquired by many students from different countries, who study medicine in Cuba, she added.

Chan noted that Cuban medical education, which is based on the clinical method, is an example to follow and something about which the country should be very proud.

Morales, reaffirmed his country's commitment to collaboration with WHO in any health emergency and said that the organization could always count on Cuba to improve the health of people in need.

He also thanked her for the acknowledgement of his country's work in her speech in the plenary of the Assembly, when she said that Cuba had been the first country in the world to eradicate HIV and syphilis transmission from mother to child, which is an important step towards an AIDS-free generation.