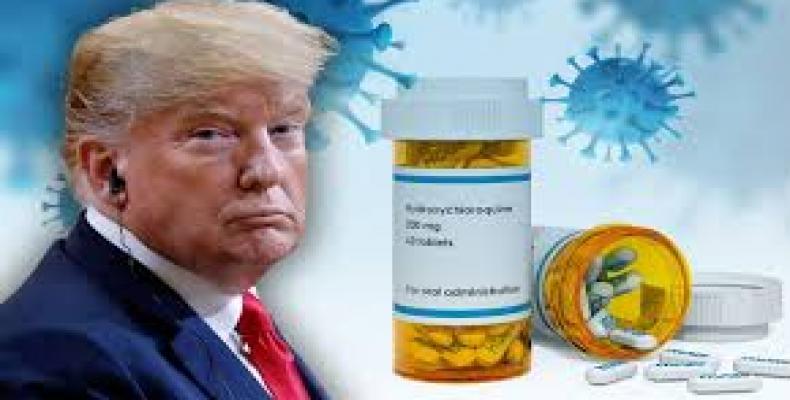 The World Health Organization has paused the clinical trials of anti-malarial drug hydroxychloroquine in coronavirus patients. It says the drug, notably taken and endorsed by US President Donald Trump, has raised safety concerns.

The drug’s safety data is being reviewed by a monitoring board, and the trials have been put on hold, the WHO chief Tedros Adhanom Ghebreyesus told reporters. It was being tested as part of the Solidarity international program aimed at tackling the Covid-19 pandemic.

The UN health body took the step out of an “abundance of caution,” said Mike Ryan, the head of the organization’s emergencies program.

The WHO move comes after a prestigious British medical journal, The Lancet, published a study on the side effects of the drug. The article found a higher mortality rate among the Covid-19 patients that had received it. This is in contrast with the earlier positive reviews of the drug, said to have observed just the opposite.

Ghebreyesus said a monitor will now “review a comprehensive analysis and critical appraisal of all evidence available globally” regarding the effects of hydroxychloroquine. The “likely side effects” of the drug seen in patients suffering from “severe” Covid-19 cases involved “cardiac complications, including development of cardiac arrhythmias,” Ryan said.

The WHO has previously advised against the widespread use of the drug in the treatment of Covid-19, arguing that it should be reserved solely for clinical trials. However, it has been actively promoted by Trump, who even took a two-week course of hydroxychloroquine as a preventive measure against the coronavirus. In his latest interview, published Sunday, Trump said he'd finished the course and “is still here.”

The US president’s statements – which rammed home the message that the cheap and decades-old drug “saves lives” – have sparked a flurry of warnings and skeptical media commentary. Some channels rushed to caution the drug might literally “kill” people, while others doubted Trump took it at all. The developments prompted the White House physician, Sean Conley, to say that the benefits of such treatment “outweighed” the risks – but he stopped short of directly confirming if the president took the course.

Major pharmaceutical companies have been engaged in a race to develop a vaccine against the dreaded disease, although scientists warn it is unlikely to arrive any sooner than in 12-18 months.

In mid-May, Trump announced what he called “Operation Warp Speed” – a major effort to develop a vaccine that would see the government investing in “all top vaccine candidates.” The number of those has so far been narrowed down to 14 and will be cut down further. Trump said he “would love” to see a vaccine not just developed but also manufactured and distributed by the end of the year.

In absence of vaccine, several companies have pushed their drugs as possible remedies against Covid-19. One of them is remdesivir developed by Gilead Sciences, which has been touted as a “miracle” drug against the disease, even though the results of its use against the coronavirus have been mixed at best. Remdesivir is also estimated to cost between $390 and $4,500 per dose – hundreds of times more than drugs like hydroxychloroquine, which costs less than one dollar.