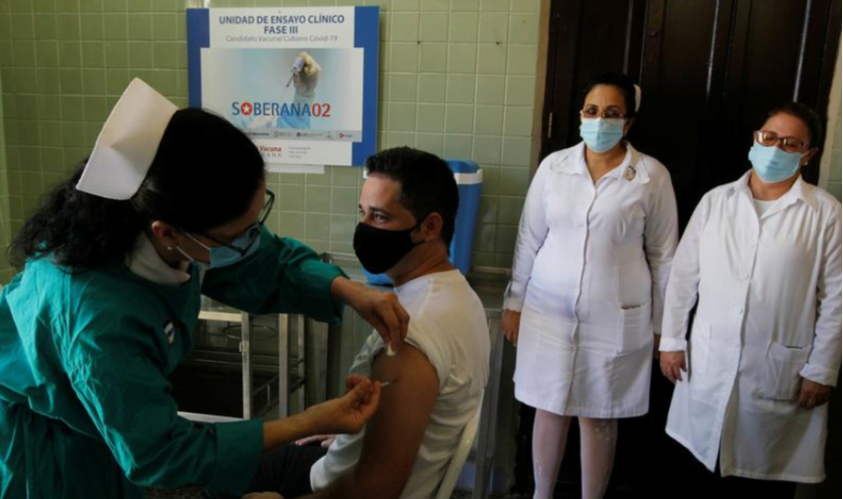 A volunteer receives a dose of the Soberana-02 COVID-19 vaccine, as part of Phase III trials of Soberanoa Cuban vaccine candidate, in Havana, Cuba, March 31, 2021. Jorge Luis Banos/Pool via REUTERS

Havana, April 1 (RHC) -- Cuba’s homegrown vaccine candidates have made headlines worldwide. Less well-known is its production of medical gear such as ventilators and CT scanners for the treatment of COVID-19 patients in a bid to achieve “technological sovereignty” during the pandemic, says Reuters news agency.

According to the international news organization, during a tour of production facilities in Havana on Wednesday, officials touted the medical gear that had enabled them to save money and keep the mortality rate from COVID-19 low even as other countries had struggled to import such equipment.

“Our country is saving money and could save many millions of dollars thanks to all the results of sovereignty we have achieved,” said Eduardo Martínez, head of state-run biopharmaceutical corporation BioCubaFarma.

Cuba has sought to develop such manufacturing in part in response to the decades-old U.S. trade embargo, tightened by former President Donald Trump, which hampers the import of medical equipment, recalled Reuters.

Daily coronavirus cases hit a new record of 1,051 on the island of 11 million inhabitants on Wednesday, bringing the total to more than 75,000. Deaths remain low at 424, one of the lowest rates per capita worldwide.

The Caribbean island is on the brink of a possible major biopharmaceutical achievement, namely the development of a homegrown vaccine. Its most advanced candidate, currently in phase three trials, is called Sovereignty 2.