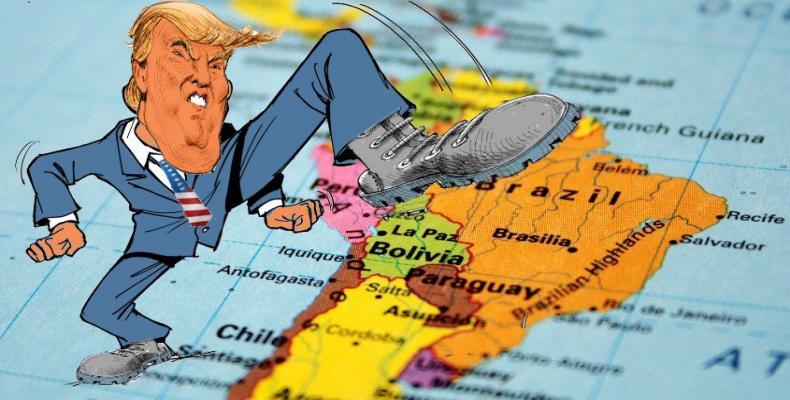 In today’s “This week in Cuba,” we review, first, a discussion in a Cuban television news program of the aggressive policy of the United States against Cuba; secondly, an article in Granma on the effects of the U.S. blockade on Cuban bean production; thirdly, an article in the Cuban press on the reactivation of the Monroe Doctrine by the Trump administration; and fourthly, Cuban press coverage on the intentions of the coup plotters in Bolivia to privatize lithium.

(1) The aggressive policy of the United States against Cuba

On Wednesday, February 26, the evening television and radio news program La Mesa Redonda was dedicated to analysis of “the aggressive policy of the United States against Cuba.” The panelists were Renaldo Taladrid, a prominent television journalist who regularly makes commentaries on the United States; and Jesús Arboleya, a well-known intellectual and retired diplomat who served the Cuban diplomatic corps in the United States.

They observed that the intention of the U.S. blockade of Cuba has been to create economic problems in Cuba, in order to promote popular rejection of the Revolution. This has been the intention from the beginning, and it continues to be so today. Although the United States often claims that it is opposed to the Cuban government and not the Cuban people, that it is supporting the Cuban people, in fact that blockade has multiple negative consequences for the people. A clear illustration of this is the action by the Trump administration to block the cruise ships, which had been docking in Cuban ports since the Obama opening. This measure had very little impact on the Cuban government, because the cruise ship tourists were not staying in state-owned hotels. But they did provide a good source of income for self-employed taxi drivers and privately-owned restaurants and souvenir shops and vendors that operate in the zones where the cruise ships dock.

The panelists maintained that the Trump administration knows no limits; it completely ignores widely accepted international standards with respect to diplomacy and commerce. It intimidates banks and companies in third countries, threatening them with sanctions, causing some to withdraw from agreements with Cuba, agreements that were beneficial to them, for fear of having problems with the United States. It likely is no coincidence that several Spanish companies had sanctions against them announced by the U.S. government only days after the Spanish government had denied the U.S. request to recognize Juan Guaidó as President of Venezuela, a decision that the government of Spain has every right to make as a sovereign nation. The panelists maintained that such a policy of intimidation cannot be successful in the long term.

They observed that the enemies of Cuba say that the Cuban economy does not work, and the Cuban government uses the blockade as an excuse to explain away economic problems in Cuba. If this were true, why doesn’t the United States simply eliminate the blockade? According to their logic, this would take away the excuse and expose for all to see the failure of the Cuban economic system. The panelists maintained that, although there are endogenous problems in the Cuban system of production, the eliminations of the blockade would enable the Cuban economy to overcome the great majority of difficulties that it has, as anyone with knowledge of Cuba understands.

An article on February 27 in the digital version of the Cuban daily Granma maintains that the intensification of the U.S. blockade has led to a deficit in the availability of pesticides, fertilizer, and fuel, which has had a significant effect on the production of beans. According to Yojan García, Head of the Department of Produce of the Ministry of Agriculture, only 16% of the acreage devoted to the cultivation of beans have been fertilized, and only 15% has been sprayed with chemical insecticides, which combined with the lack of fuel for the carrying out of various tasks, has resulted in a reduction in the quantity of beans delivered for distribution to the population by more than 50%.

García reported that specialists have confirmed the presence in the national bean cultivation of an insect of Asian origin that is commonly known as “bean flower thrips.” The plague has affected production in eight provinces of the national territory. He stated that strategies of detection and control of the plague are being developed.

(3) The reactivation of the Monroe Doctrine by the Trump administration

An article in the February 25 issues of Granma reviews the reactivation of the Monroe Doctrine by the Trump administration. The author of the article, Elson Concepción Pérez, cannot resist observing that James Monroe, the fifth president of the United States who emitted the doctrine more than 200 years ago, was a soldier, lawyer, senator, governor, and secretary of state before he became president, whereas as Trump is a multimillionaire who is unskilled in politics, who knows nothing more than to repeat what Monroe said, “America for the Americans.”

Concepción notes that Trump, before the General Assembly of the United Nations in 2018, cynically declared that “it has been the formal policy of our country since President James Monroe to reject the interference of foreign nations in this hemisphere and in our own affairs.” The Monroe doctrine has been invoked by other members of the Trump administration, Concepción notes. In February 2018, then Secretary of State Rex Tillerson asserted that “the Monroe Doctrine is as relevant today as the day that it was written.” And John Bolton, when he was part of Trump’s team, declared that “Russian interference in Latin America could inspire Trump to reaffirm the Monroe Doctrine.”

Concepción observes that the invoking of the Monroe Doctrine is fully consistent with U.S. policy toward Latin America, which has included unconventional war and the threat of military intervention against Venezuela, the coup d’état against Bolivia, the intensification of the blockade against Cuba, destabilization directed against Nicaragua, and interference in the affairs of various nations of the region.

President Theodore Roosevelt in 1904 understood the Monroe Doctrine to mean that “if a European country threatens or places in danger the rights or property of U.S. citizens or companies, the Government is the United States would be obligated to intervene in the affairs of that nation.” Concepción observes that this is euphemistic language; it is really a question of U.S. imperialist intentions with respect to Latin America.

In response to questions by the decadent U.S. press with respect to proclamations that he had made during has career with respect to Latin America, Bernie Sanders mentioned the two most infamous. The 1954 CIA-supported coup d’état in Guatemala, which overthrew elected President Jacobo Árbenz, whose crime was nationalizing some of the land of the United Fruit Company. And the 1973 coup that overthrew democratically elected socialist president Salvador Allende and installed the brutal regime of Pinochet.

Sanders did not mention the other fourteen coups, nor the military interventions, nor the continuous imperialist policy of U.S. governments from the end of the nineteenth century to the present, regardless of political party. But at least he is on the right track.

An article in the digital version of Granma on February 26 reports that Luis Arce, Minister of the Economy in the government of Evo Morales and presidential candidate of the Movement toward Socialism in Bolivia, has declared that the privatization of lithium is one of the objectives of those who carried out the coup d’état last year. Lithium is an ideal material for the fabrication of electric batteries and for the storage of energy; it plays an indispensable role in manufacturing electronic devices such as cell phones and tablets, as well as electric automobiles. The “Lithium Triangle” that Bolivia shares with Chile and Argentina has 70% of the world’s reserves of the mineral. The government of Morales was beginning to industrialize the production of Lithium, which would result in benefits for the Bolivian state and people; but its privatization would mean that transnational corporations will control and benefit from its production, in accordance with the historic pattern with respect to Bolivia and Latin America.