Notes for an agenda (VII) 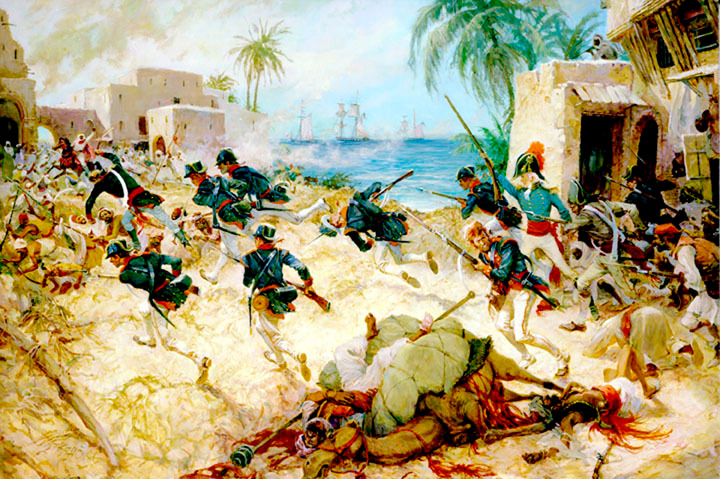 Battle of Derna (1805).  During the First Barbary War it was the first land battle of the United States outside its territory.

We are already in October and the Summit on Democracy, Human Rights and the fight against Terrorism, called for next December by the President of the United States, Joe Biden, with the purpose of talking about these issues with a group of allied countries and servants, is not far away.

It is convenient, then, to contribute with a new delivery of notes for an eventual agenda that Washington could present to its guests, if it really intends to discuss in depth, with honesty and courage about how the North American country acted from its early days to the present.

Let's talk today about what seems to be Americans' favorite pastime, war, a constant throughout every year of their history at home and abroad.

Like many nations on our continent, the original 13 Colonies, embryo of what today is the main economic and military power, fought a long and bloody war to achieve their independence from the British metropolis.

The fact is that between 1776 and 1799 it did not know a single year of peace because at the same time that it fought for its sovereignty it began its expansion into neighboring territories, to establish its power and "defend" its borders.

Its first wars were against the indigenous peoples near its borders, such as the Chickamauga, Cherokee, Pennamite and Oconee, among others, who were successively dispossessed of their property. We have already spoken before about this genocide that was never judged or punished.

In such early times, the nascent empire also managed to enter into conflict with Algeria and other North African states, which were the prelude to the so-called Barbary Wars, which occurred already in the early years of the 19th century.

A curious episode was the so-called "almost" naval war against France, which occurred between 1798 and 1800 without a formal declaration of hostilities, but with violent fighting. Those who have read The Age of Enlightenment, by Cuban genius Alejo Carpentier, knew it as the "Brigantes' War".

I say it was curious, because Paris was one of the great allies during the struggle for American independence, but after the French Revolution, especially the elimination of the monarchy in 1792, things changed.

As a harbinger of the paradoxes that the world would see years later, in 1794 the United States signed Jay's Treaty to strengthen relations with the British, a few years earlier its main adversaries.

It was the first lesson that in this type of politics there are no friends or gratitude, only interests.