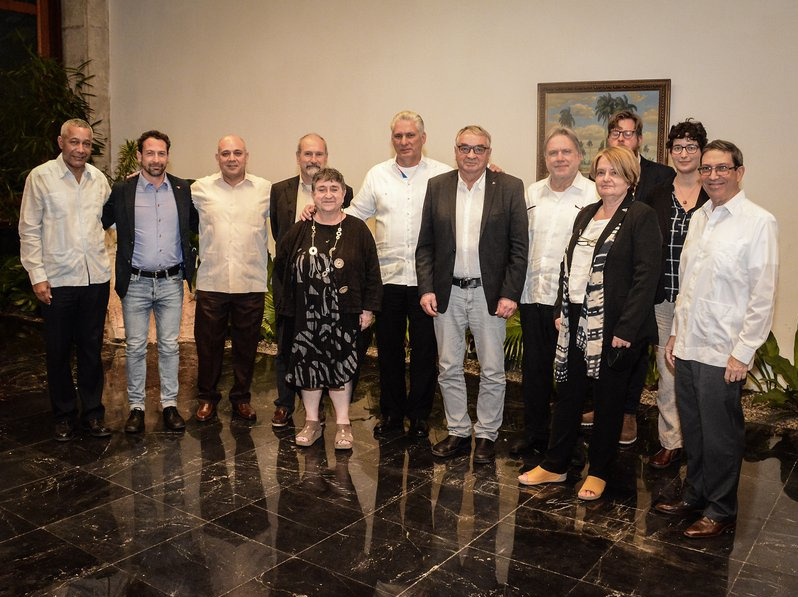 Europeans once again bring their solidarity and support to the struggle waged for sixty years by the Cuban people for the lifting of the genocidal U.S. blockade, which hinders their socioeconomic development and their efforts to build a better country.

The visit to our country by a delegation of the Party of the European Left is one more example of the ties that unite us with the old continent, although some try to hinder them, following a failed script dictated for decades by the United States.

President Miguel Díaz Canel described the presence among us of the European representation as an act of courage, given the media campaign against Cuba, which has intensified in recent times.

The support to the Cuban people has been a constant of the Party of the European Left since its constitution in 2004. It has also made its own the battle for the release of the five Cuban anti-terrorist fighters, arrested in 1998 in the United States for monitoring the criminal actions against Cuba of ultra-right-wing groups of Cuban origin, settled in U.S. territory.

In May 2020, the organization sent a letter to then President Donald Trump demanding an end to the economic, commercial and financial siege, which it described as cruel even more so in the midst of a global health crisis and in violation of the human rights of an entire people.

The reality is that citizens, social organizations, trade unions, politicians and Euro-deputies have not hesitated to offer their support to the Cuban people, which has become especially intense in these times of pandemic.

There have been many campaigns to send donations to the Caribbean nation in the face of the tightening of the blockade. Let us not forget that U.S. President Joe Biden maintains the 243 measures decreed by his predecessor Donald Trump, 50 of them in the midst of a health emergency due to COVID 19.

From the old continent, medical supplies and syringes have arrived to the national territory to help the vaccination with own immunos, developed by our scientific community, thanks to their high preparation and dedication and the political will of the government that has made the health of citizens a priority.

European solidarity has not been limited in these months to supporting Cuba's confrontation with the disease, but actions have also multiplied to denounce the damages caused by the U.S. blockade, which affects all spheres of the socio-economic life of the Cuban archipelago and causes pain and suffering to the families.

They have also condemned the destabilizing plans, promoted and financed from U.S. soil, and defended the right of Cubans to choose their own path.

Activated in October 2020, Canal Europa Cuba has played an active role in the organization of activities such as marches, caravans and talks to make known the reality of the Caribbean nation and expose the effects caused by the hostile U.S. policy, condemned by the UN General Assembly since 1992.

The solidarity of citizens, civil society organizations, political parties, parliaments and Euro-deputies with Cuba is intense and highly appreciates the courage and perseverance of those who accompany it unconditionally and selflessly in its struggle for the lifting of the genocidal U.S. blockade, the longest in history.