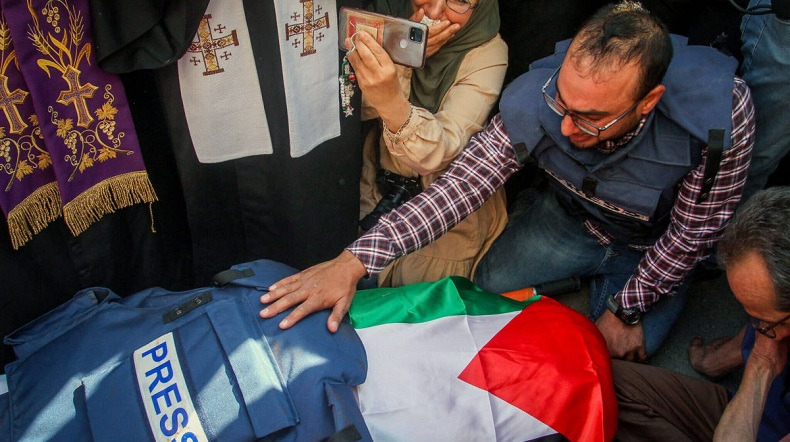 A great indignation is sweeping the world after the brutal murder of Palestinian-American journalist Shireen Abu Akleh, who was shot by the Zionist Israeli army, despite wearing all the identification that accredited her as a member of the press.

The 51-year-old journalist was born in Tel Aviv-occupied East Jerusalem, studied at Yarmouk University in Jordan, and for nearly three decades was dedicated to reporting on the atrocities committed against the Palestinian population in the West Bank and Gaza Strip.

She was a highly experienced and recognized professional who founded and worked at Voice of Palestine radio, collaborated with the UN Agency for Palestinian Refugees, Radio Monte Carlo, Amman Satellite Channel and Moftah Foundation, before joining the Al Jazzera network in 1997.

In addition to his daily reporting on the situation of his people, he was known for his coverage of numerous events, including the Israeli siege of Jenin in 2002, the death of leader Yasser Arafat in 2004 and several frustrated attempts to find a political solution for the Middle East.

Because of his professional performance, he was undoubtedly an uncomfortable figure for the Tel Aviv government.

Although both the Prime Minister, Naftali Bennett, and other Israeli officials tried to deflect responsibility for this assassination, arguing that there was rebel activity at the scene and that he may have been shot by a Palestinian gunman, the evidence shows otherwise.

Other communicators who were there denied any outside presence of Zionist soldiers, or that any fighting had occurred. Najah University in Nablus, where Abu Akleh's autopsy was performed, reported that she was shot in the face.

The Palestinian government, numerous organizations and several countries demanded an independent investigation into what appears to be a direct execution, perpetrated with full intent and in cold blood.

Earlier this year the journalist wrote about the city of Jenin, where she lost her life this week, that it "embodies the Palestinian spirit that sometimes trembles and falls, but, beyond all expectations, rises to continue its struggles and pursue its dreams."

The International Criminal Court has opened an investigation against Israel for possible war crimes against Palestinian civilians, a process plagued with obstacles, especially due to the attitude of the United States, which is spreading a protective mantle against its ally and gendarme in the Middle East.

Killing the truth is always what empires and occupiers do all the time.