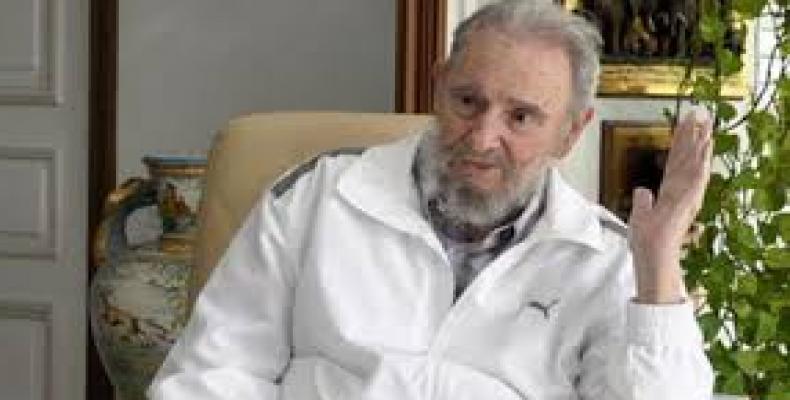 Just over one week away from his birthday, and although he has been away from the presidency for nearly ten years, Fidel Castro continues to be the source of news in the Americas and in the rest of the world.

This fact could be seen during the celebrations of the five hundredth anniversary of the city of Santiago de Cuba, on the occasion of the twenty sixth of July, the sixty second anniversary of the historic attack on that city’s Moncada Army Barracks, a military action by a guerrilla group led by Fidel that sparked the flames of the final independence of Cuba.

Just days after that ceremony on July 26th, the Leader of the Cuban Revolution received the title of Doctor Honoris Causa, granted to him by the National University Twentieth Century of Bolivia. The university's rector, Jose Guillermo Delence, declared that Fidel Castro is and will always be the main pillar of the Socialist Revolution in Cuba, as the promoter of the constitution and consolidation of the Great Motherland and an example in the struggle for the welfare of humanity.

The official document that accompanies the distinction granted to Fidel Castro by that Bolivian educational institution notes that Fidel has earned the title of Doctor Honoris Causa because of his anti-imperialist legacy and his solidarity with the humblest nations and peoples of the world.

We recall the verses from the most universal of all Cubans, Jose Martì, when he wrote: “With the humblest of the Earth I want to share my destiny.”

It was Fidel Castro who pointed to Jose Martì as the intellectual author of the Assault on the Moncada Barracks, the spark that ignited the flames of rebellion against tyranny.

But the news with the widest repercussion on the eve of Fidel Castro’s birthday, comes from the world-famous TV news channel Discovery, which has announced that it will soon air a one-hour-long documentary that reveals that Fidel Castro was the most spied upon person by U.S. intelligence agencies.

Discovery has revealed that its documentary will include the declaration of U.S. spies, CIA analysts, along with documents from the CIA and the KGB.

The Discovery announcement promises to show unclassified spy documents on Fidel Castro that have never been revealed before.

These are new birthday presents to Fidel Castro, the Cuban Revolutionary leader who has survived no less than 638 assassination attempts by the intelligence community of the United States. These plots have had the support of mercenaries and murderers such as the fugitive from Venezuelan justice Luis Posada Carriles, a resident of Miami, from which scores of terrorist actions against Cuba and its leaders have been planned.

Despite all these murder and terrorist plots, Fidel Castro is alive and well, and will be praised on his birthday by his people and all peoples of the world.