Venezuela without apocalypse: the coup of the trucks that didn't happen 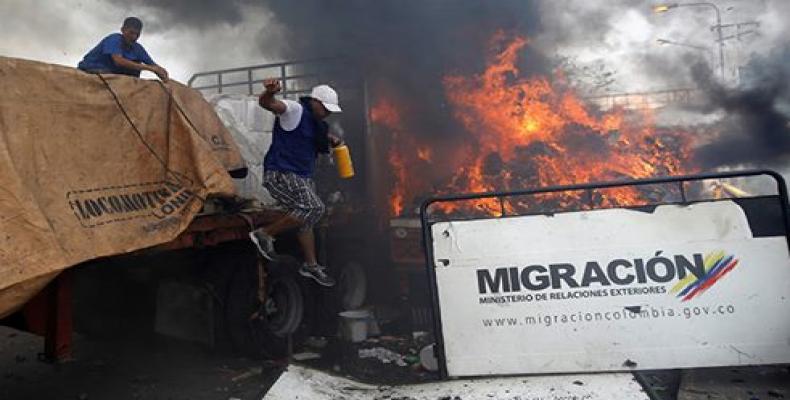 By Marco Teruggi. (From Ureña, Táchira)

On February 23, the day of the announced entry of humanitarian aid to Venezuela arrived, and ended. The apocalyptic predictions did not take place, Nicolás Maduro did not fall, Juan Guaidó remained in Cúcuta, the country did not enter into a cinematographic confrontation. High voltage? Many, particularly in the border area that separates the two countries through three bridges over an almost dry river: Simón Bolívar, Tienditas, and Santander. On one side Táchira, the cities of San Antonio and Ureña, on the other North of Santander, with the city of Cúcuta.

The day started early with what was expected, a frontal pressure with media force on the bridges. The actions had moments of euphoria, due for example to that a handful of members of the Bolivarian National Guard (GNB) decided to join the ranks of Trump-Rubio-Duque-Guaidó. The euphoria dropped and with the passing of the hours the certainty was formed that neither the people nor the trucks would pass for the other side.

That situation resulted in two central elements. On the one hand, the deployment of a permanent confrontation on the Bolívar and Santander bridges, to which was added an attempt to occupy the San Antonio airport that was deactivated, and on the other the use of trucks with humanitarian aid.

The confrontation recalled the violent street strategies deployed during 2014 and 2017 by the right in several cities of the country, known as guarimbas. With the difference of being concentrated in international bridges, and having the explicit support of the security bodies of the Colombian State. The cycle was repeated: move towards the Venezuelan side, back off, try to pass under the bridge in the case of Simón Bolívar. What should a government do when faced with an internationally financed attempt to invade Guarimbera?

The use of the trucks had three central moments. The first was to show some caravans on the way to the bridges and to exploit the images medically, the second to lie when affirming that they had entered Venezuela -as the Venezuelan singer Nacho did when the day was over- and the third to generate a false positive, as was the burning of two gandolas. The matrix was to accuse the GNB, when it was filmed how they were young front line confrontation.

The fire of the gandolas seems to have been planned, and resulted in the accusation against Nicolás Maduro of having committed a crime against humanity, the escalation of international threats, such as that also twitted by US Senator Marco Rubio, who said that Venezuela had shot in Colombian territory, and that the United States would defend Colombia in case of aggression.

The truth is that, outside those episodes, what they had announced did not happen. Humanitarian aid did not enter Venezuela at any point, not by Colombia, not by Brazil or by sea, there was no breakdown of the Bolivarian National Armed Force, the bridges resembled the images already known in the violent strategy of the right, now in a more complex framework. If it was the final day it was not, if it was the breaking point it does not seem to have been in the dimension that was announced. Once again the disillusion of the social base of the opposition was generated, confronted with the distance between the promises of its leaders -which are now international- and the real correlations of strength.

Chavismo, for its part, mobilized in Caracas, it was its fifth consecutive mobilization in five days. In this context, the government announced the breakdown of relations with the Colombian government as a central measure, in addition to the decisions made in previous days to close the borders with Brazil, Colombia, and the islands of Aruba, Bonaire and Curaçao.

The result at the end of the 23 was a great offensive that posed to be the final and did not achieve its objectives, and a Venezuelan government that remained standing before the onslaught that, as it was known, hit simultaneously on several flanks: armed, media , psychological, diplomatic, territorial. That final balance was the expected one according to the real forces -without effect inflated by social networks- and without the appearance of a new letter by Elliot Abrams, Iván Duque or Marco Rubio.

There is another balance, which is the amount of false news, constructions of rumors, untested data, without credible sources. It is part of the avalanche, the daze, the justification of new possible actions. The case of the burned trucks was the clearest on the 23rd. The difficulty often lies in confirming sources, numbers, truthfulness of the facts, something that is usually swept away in the logic of war that has the communication operation as the backbone. Nobody can be surprised by an American lie in an assault, the right to innocence is forbidden, the need for suspicion is permanent.

What will happen on the 24th or 25th? It is early to know, it seems, by how events have taken place, that pressures will continue on bridges without real capacity to enter Venezuela, threats and international meetings will go up, and perhaps a false positive of high magnitude. I announced Rubio la noche Venezuela without apocalypse: the coup of trucks was on 22 to 23 when he wrote about the possibility that the National Liberation Army of Colombia, kill civilians. He announced what they themselves seem willing to do, how to disguise it, and from Venezuela without apocalypse: the coup of the trucks was in there to justify new actions, and move from the form "humanitarian aid" to a new scheme.

The border ends in a tense night, as if something could happen at any moment. We are in complex hours and days, where one of the central objectives of the Venezuelan government, of Chavismo, is to prevent actions-traps, images of violence, violence itself, which left 42 injured on the Venezuelan side on the 23rd. An idea of ​​the social climate on Saturday night is given by the tendency of Twitter, where five of the most positioned labels are to ask for international intervention. The certainty that they will not be able to overthrow Nicolás Maduro, democratically elected, by own force, seems to be the majority.