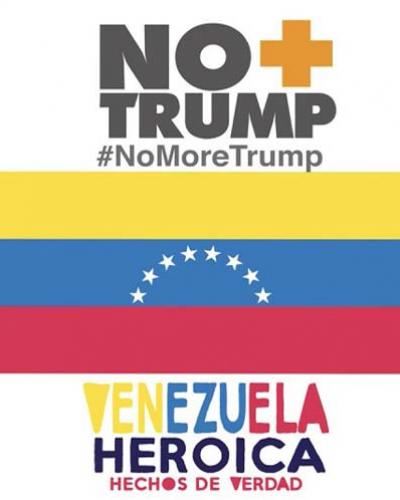 Named ‘World Protest Day’ on Saturday, August 10, massive demonstrations took place in Venezuela and throughout the world against the economic, financial and commercial blockade imposed by U.S. President Donald Trump on the South American country.

Hundreds of thousands of people were in the streets of Caracas with signs that read: ‘No Mas Trump’ in protest to the U.S. president and his administration that has prevented the Venezuelan government from accessing billions of its own dollars, and blocked food and medicine from entering the country.

Addressing the Caracas crowds, President Maduro said: "I salute the protests against the United States and their allies within Venezuela."  He added: "It is amazing to see all the people who joined across the country to say #NoMoreTrump, and we thank the solidarity of the world."

In a sign of solidarity with the people of Venezuela, demonstrations were held in countries such as Australia, Haiti, Turkey Italy, Germany, Dominican Republic, Argentina, and Mozambique.

Through a manifesto addressed to the international community, the Latin American social movements expressed on Saturday their support for the Venezuelan people and rejected any form of U.S. aggression against the Bolivarian revolution and its government.

"In recent years, we have witnessed multiple tactics deployed by U.S.-based businesses which, through an alliance with a fraction of the Caracas oligarchy, have been eager to control the country’s oil and reaches," stated the Articulation of Social and Popular Movements towards the Bolivarian Alliance for the Peoples of Our America (ALBA movements).

"Following the U.S. Hybrid War Manual, those tactics have included actions such as the attempted assassination of the legitimately elected president Nicolas Maduro, road blockades, military uprising attempts, cyberattacks against electricity and water networks, the blockade of Venezuelan assets abroad and the support to a ridiculous self-proclaimed government."

Fortunately, the ALBA movements recalled, most Latin American countries continue to support the Venezuelan people and democracy.  "As usual, only the far-right governments joined the interests of companies based on the U.S., Colombia, Brazil, Israel, and so on," the manifesto states, concluding that "in the face this aggression, we are willing to express our solidarity with the Venezuelan people and defend the democracy that Nicolas Maduro chose and the self-determination of the peoples.

The ALBA movements’ manifesto was signed by more than 100 organizations, among which are the Landless Rural Workers Movement (Brazil), Patriotic March and People's Congress (Colombia), Farmers’ Unity Committee (Guatemala), National Front for the Defense of Economic and Social Rights (Panama); Big Homeland Front, Popular Dignity Movement, Resist and Fight (Argentina), and the Freedom and Equality Movement for Fraternity (Haiti).