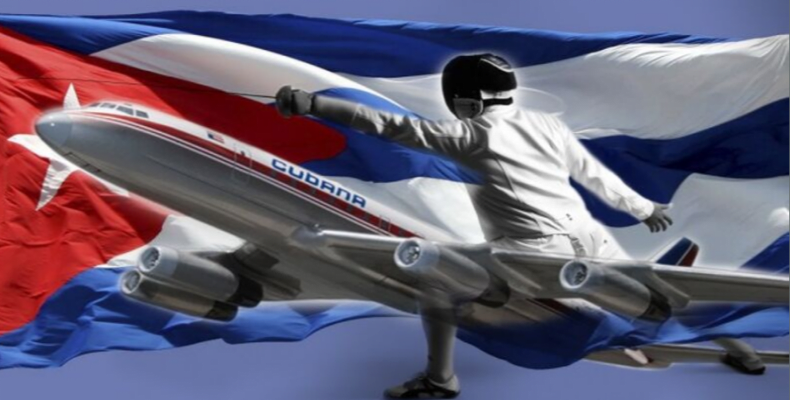 On October 6, 1976, forty-three years ago, Cubana Airlines flight #455 departed from Seawell International Airport on the small Caribbean island of Barbados, headed for a stop in Kingston, Jamaica, before proceeding to the José Martí International Airport in Havana. A total of 73 persons were on board, including crew. Among them were 24 members of the Cuban fencing youth team, who had won all the gold medals in the Central American and Caribbean Championship, held in Venezuela. Also on board were fifteen crew members of Cuban airlines that were between assignments in Barbados. In addition, on board were five workers of the Cuban National Institute of Fishing; five cultural representatives of the Democratic Republic of Korea; and eleven Guyanese youth, six of whom had received scholarships to study in the Faculty of Medical Sciences in Cuba.

Nine minutes after take-off, the pilot sent an urgent message to the radio tower: “Seawell! Seawell! Cubana 455. Seawell! We have an explosion on board. We are descending immediately. We have fire on board. Cubana 455. Can we return to the landing field? Seawell. Cubana 455. We are requesting immediate landing. Immediate.” The response from the Tower: “Cubana 455: Authorized to land. Received.” Seconds later, a nearby Venezuelan airline identified itself, and asked, “Can we help in something?” Silence was the response.

On October 15, one million Cubans assembled in the Plaza of the Revolution for a ceremony of mourning for the victims. In a discourse pronounced on that occasion, Fidel Castro informed the people that all 73 persons on board had perished, including 57 Cubans. He explained that the great part of the human remains were in the depths of the ocean, and the mortal remains of only eight Cubans were recovered. He declared that the remains of those eight will be buried in Cuban land, a symbol of the 57 healthy, vigorous, enthusiastic, and self-denying youth, who with an average age of 30 years, had already lived immensely rich lives dedicated to work, study, sport, family relations, and the Revolution. Fidel also praised the bravery of the pilots, who made every effort to return the plane to land. He informed the people that the information they had received indicated that it was an act of sabotage, with evidence that persons connected to the CIA were involved.

In the societies of the North, analysis of terrorism focuses on terrorist actions carried out by clandestine groups. In its classic form, it involved assassination of officials of a repressive state, especially those known for their brutality, or the collaborators with the regime. Although this classical form of terrorism was debated within revolutionary movements and apparently was adopted in some cases, it was used on a very limited scale, even in cases in which the struggle took the form of a guerrilla war. The Communist International took an explicit position against terrorism and prohibited its member parties from practicing it. The 26 of July Movement in Cuba rejected the practice as immoral and unethical and as a dysfunctional political strategy.

After the Six-Day War of 1967, a new kind of terrorism has emerged, carried out by clandestine groups in the Arab world. The new terrorism has a higher level of violence. It attacks civilians intentionally, not as an accidental byproduct; and it kills indiscriminately, without selecting the victims on the basis of their specific role in the political and social system.

In accordance with this Third World perspective on terrorism, Jesús Arboleya, former Cuban diplomat and currently adjunct professor at the University of Havana and at the Higher Institute of International Relations of Cuba, has written a book on what he calls “the other terrorism,” the terrorism not seen from a perspective that focuses on the activities of clandestine groups. He maintains that in human history, terrorism has been an integral part of any system of domination that does not have popular support. This type of terrorism is institutionalized terrorism, carried out by the state and directed against the civil population with the intention of intimidating the entire society. Terrorism of this type is not carried out by an absurd criminal or by clandestine groups. Rather, it is rational act of the state and a conscious strategy of domination. It is characterized not only by the brutality of its methods but also by the fact that targets the entire population.

The media of communication rarely speak of the systematic terrorism of the state. They focus on terrorist acts carried out by small groups connected to popular struggles. But in fact, Arboleya maintains, terrorism of the state is far more damaging, not only in terms of the number of victims, but also for its implications for the fabric of society, as it promotes a culture of violence that extends to other forms of human violence.

Arboleya identifies three forms of state terrorism in the neocolonial era of the modern world-system. The first has been “the indiscriminate use of force against the civil population during armed conflicts.” The bombing of densely populated cities during World War II established a precedent that later was used in Viet Nam, Yugoslavia, and Iraq.

The second form of state terrorism has been action of neocolonial states against its own population, with the pretext that the intention is to confront foreign enemies that threaten democratic values. “Genocide, torture, generalized repression against communities, extralegal executions, the kidnapping and disappearing of persons, as well as the creation of paramilitary groups and mercenaries that act at the margin of the law with the protection of their respective governments, have been the methods utilized by some neocolonial states to eliminate outbreaks of resistance against the established power.” This form of state terrorism particularly found expression in the Latin American dictatorships, whose victims are calculated in the tens of thousands. The brutal intimidation of the Latin American population made possible the implementation of the neoliberal project after 1980.

The third form of terrorism of the state has been carried out in the context of “wars not declared,” involving “the creation, financing, and even the directing of opposition groups, often openly terrorist, in order that they would act against the states that have transgressed the order” that the dominant states seek to impose and maintain. The methods include assassination of leaders, economic sabotage, and the creation of an international political climate through a media campaign of lies and distortion. This has been a common practice of the United States since the formation of the CIA in 1947, and governments that have been overthrown through these methods include those of: Muhammad Musaddag of Iran in 1953; Jacobo Arbenz of Guatemala in 1954; Patricio Lumumba of the Congo in 1961; Salvador Allende of Chile in 1973; and the Sandinista government of Nicaragua of the 1980s.

Terrorism has been an integral part of U.S. policy toward Cuba since 1959. The Eisenhower and Kennedy administrations adopted a policy of economic strangulation, diplomatic isolation, internal destabilization, and the promotion of terrorist activities, with the intention of creating a climate that would justify U.S. military interventions. Following the failure of the Bay of Pigs invasion, the Kennedy administration, on November 30, 1961, approved a plan that included the direction of counterrevolutionary efforts that would carry out terrorist sabotage, which would justify military interventions. In accordance with this plan, a special unit of the CIA created in 1962 approximately 55 legitimate companies in Florida that supported covert counterrevolutionary activities in Cuba. Fabián Escalante Fonte, in Cuba: The Secret War of the CIA, published in 1993, chronicles 5,780 terrorist actions, of which 716 were major acts of sabotage against economic and social installations. Terrorism had become the official policy of the United States with respect to Cuba.

In 1962 and 1963, the U.S. government no longer directly supported internal clandestine groups in Cuba, which had been nearly totally dismantled by Cuban civilian-military security. Rather, the U.S. strategy was to use the Cuban émigré community as the base of the Cuban counterrevolution. During the period, the CIA directly and indirectly financed and supplied counterrevolutionary groups in Miami that were engaging in counterrevolutionary activities in Cuba, including sabotage of the Cuban energy, transportation, and production infrastructure. Such injection of resources by the CIA was the base for the economic development of the Cuban-American community in Miami and the re-composition of the Cuban figurehead bourgeoisie and other privileged sectors into a Cuban-American bourgeoisie.

Nevertheless, the Cuban-American organizations of the Left of the 1970s did not have sufficient cohesion or capacity to reframe U.S. policy toward Cuba on a foundation of alternative premises, nor did it have the necessary resources to influence U.S. policy. The counterrevolutionary rhetoric remained the official line of U.S. policy and of the sectors that controlled the political life of the Cuban-American community. The United States government did not have the political will to reign in the terrorist operations that it had created.

Orlando Bosch, a pediatrician with criminal antecedents in Cuba, is believed to be the mastermind behind the 1976 crime of Barbados. He was incorporated early in the Cuban counterrevolution, and he was trained by the CIA. In 1968, he was condemned to ten years of prison for firing a bazooka against a Polish ship anchored in Miami. While in prison, he founded Cuban Power, an organization based in Miami that perpetuated terrorist activities in the United States. After being granted conditional liberty, he illegally left U.S. territory. He was detained again in 1976, accused of being the mastermind of the terrorist attack against the Cuban airline departing from Barbados. He was declared innocent for lack of proof, in a trail full of irregularities. He then traveled illegally to the United States, where he was granted liberty, as a result of the intervention of President George H. Bush.

Another infamous person in the story of U.S. sponsored terrorism against Cuba, although apparently not directly connected to the Barbados crime, was Luis Posada. Posada worked as a chemist in a North American sugar company, with little interest in politics, at the time of the triumph of the Revolution. However, he soon became involved in counterrevolutionary activities, and in 1961, he left Cuba for the United States. He was selected for inclusion in an elite group trained by the CIA in Fort Benning, Georgia, in a training program in killing, the use of explosives, the placing of bombs, and acts of sabotage. In 1967, he was sent by the CIA to Venezuela, where he occupied the post of police captain. He also was tied to the trafficking of drugs between Venezuela and Miami. With a change of government in Venezuela, he relocated to El Salvador, where under the command of Félix Rodríguez, another Fort Benning graduate, he served the CIA in the 1980s in the illegal supplying of arms to the Nicaraguan counterrevolution, financing the operation through the trafficking of drugs headed to the United States. In 1994, he was involved in the planning of a frustrated attempt to assassinate Fidel Castro at the Latin American Summit in Panama; and in 1997, he organized a series of bombings of hotels in Havana, one of which resulted in the death of an Italian tourist. After being sentenced to prison in Panama, he was pardoned by Panamanian President Mireya Moscoso at the end of her term in 2004, and he subsequently was welcomed as a hero in Miami.

Forty-three years after the barbarous act, we remember those who were robbed of their right to life, as well as losses suffered by their children, spouses, parents, brothers and sisters, and cousins.