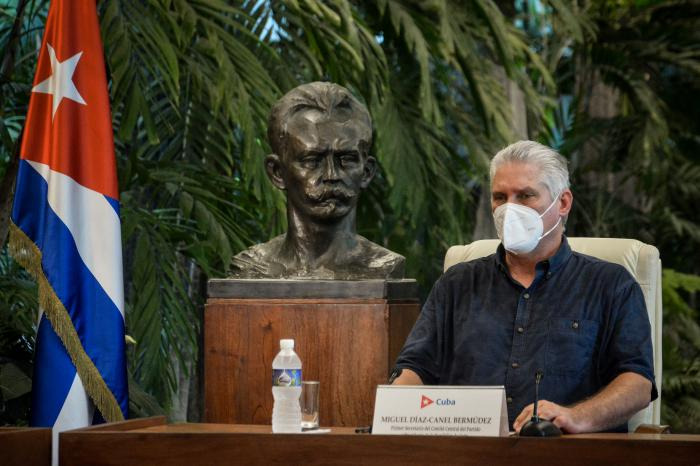 Havana, July 12 (RHC)-- The First Secretary of the Central Committee of the Communist Party of Cuba and President of the Republic of Cuba, Miguel Díaz-Canel Bermúdez, appeared this Sunday on national radio and television.

We have been honest, we have been transparent, we have been clear, and at every moment, we have been explaining to our people the complexities of the current times. I remind you that more than a year and a half ago, when the second half of 2019 began, we had to explain that we were going to a difficult situation. This was taken as part of the popular mood, and we have remained as part of that juncture from all the signs that were being given by the government of the United States, led by the Trump administration in regards to Cuba.

They began to intensify a series of restrictive measures, of tightening the blockade, of financial persecution against the energy sector to suffocate our economy and that this would provoke the longed-for massive social outburst, which would sow the possibilities to call for humanitarian intervention with all the ideological campaign that has been carried out, which would end up in military interventions and interference, affecting the rights, sovereignty and independence of all peoples.

That situation continued, then came the 243 measures we all know about, and finally, it was decided to include Cuba in a list of countries sponsoring terrorism, a spurious, illegitimate, and unilateral list adopted by the government of the United States, believing itself to be the emperors of the world.

Many countries suddenly submit to these decisions, but it must be recognized that others do not allow them to be imposed on them. All these restrictions caused the country to immediately cut off several sources of foreign currency income such as tourism, travel of Cuban-Americans to our country, and remittances. A plan was made to discredit the Cuban medical brigades and the collaborations of solidarity provided by Cuba, which brought in an important part of the foreign currency.

This whole situation caused a situation of shortage in the country, especially of food, medicines, raw materials and inputs to be able to develop our economic and productive processes which at the same time contribute to exports. Two important elements are cut off: the capacity to export and the capacity to invest resources. And from the productive processes to develop goods and services for our population.

We also have limitations in fuel and spare parts, and all this has caused a level of discontent, together with accumulated problems that we have not been able to solve and that came from the special period together with a fierce media campaign of discrediting as part of the unconventional war that tries to fracture the unity between the party, the State, and the people; that tries to portray the government as insufficient and incapable of providing well-being to the Cuban people and that tries to claim from a position of the United States government that with them we can aspire to the progress of a country such as ours.

These are the usual hypocritical prescriptions, discourses of double standards that we know very well throughout the history of the United States towards Cuba: how did they intervene in our country, how did they seize our island in 1902, how did they maintain their domination of our island during the period of the pseudo-republic and how were those interests beaten by the Cuban Revolution when it triumphed?

They have been very annoyed for 60 years by the example of the Cuban Revolution and have constantly been pushing back. They have applied an unjust, criminal and cruel blockade, now intensified in pandemic conditions, and therein lies the manifest perversity, the wickedness of all these intentions. A blockade and restrictive actions that they have never taken against any other country, nor against those they consider to be their main enemies.

Therefore, it has been a policy of viciousness against a small island that only aspires to defend its independence, its sovereignty and to build its society with self-determination in accordance with the principles that more than 86% of the population has supported in the broad and democratic exercise that we held some years ago to approve the current Constitution of the Republic of Cuba.

In the midst of these conditions comes the pandemic, a pandemic that has not only affected Cuba, but the whole world, including the United States. It has affected the rich countries and it must be said that in the face of this pandemic neither the United States nor those rich countries had the capacity to face its effects at the beginning, and in many of those first world countries, with much more wealth, the health systems and the intensive care wards collapsed. The poor were disadvantaged because there are no public policies oriented to the people for their safeguard, and they have indicators in relation to the confrontation of the pandemic that have worse results than those of Cuba in many cases.

Thus, we made progress, we controlled outbreaks and resurgences, with a tremendous capacity of sacrifice of our people, of our scientists, of our health personnel and almost the whole country has been involved in it. Five vaccine candidates have been created, one of which has already been recognized as a vaccine and is the first Latin American one. Cuba is already vaccinating its population. It is a process that takes time. Vaccines have to be produced, but at the moment we have one of the highest vaccination rates in the world, and in a few weeks, we have surpassed 20% vaccination of the population, a process that continues.

In the last few months, strains that are more aggressive and cause more transmission of the disease have started to circulate. In the midst of this situation, a group of complications are beginning to appear. In the first place, the cases occur with a speed and accumulation that exceeds the capacities that we have been able to create to attend to these cases in state institutions. On the other hand, we have had to open capacities in other centers and by opening more centers, to which we also have to give energy priority even in the midst of accumulated energy problems that have caused blackouts, the number of circuits that we have to protect to attend COVID  patients causes that more circuits are likely to suffer from annoying but necessary blackouts, because we have to reestablish our electric generation capacities. This has happened in these days and has caused irritation, misunderstanding, worries, and effects on the population.

As we have more sick people, there is more consumption of medicines, and also our medicine reserves are running out, the possibilities of acquiring them are very difficult. In the midst of all this, we continue with will, thinking of everything, working for everyone. Now we have to go to the experience of home admission due to the lack of capacities in a group of provinces, and we have had to summon the family so that they have a more direct and responsible participation; and one never tires of admiring in the midst of this situation the capacity of creative resistance that our people have. And how with these values, if we accompany ourselves with responsibility and unity, in the shortest possible time with vaccination and responsible behavior, complying with hygienic and sanitary measures, social isolation and physical distancing, we will come out sooner rather than later from this pandemic peak which is not only a Cuban case.

What Cuba achieved was to postpone this pandemic peak in time with everything we did, and also in the shortest time we will overcome it, and this is how we have ratified it in these days in our tours through the provinces to point out all the strategies to confront the pandemic.

In a very cowardly, subtle, opportunistic and perverse way, based on the most complicated situations we have had in provinces such as Matanzas and Ciego de Avila, those who have always been approving the blockade and who serve as street mercenaries of the Yankee blockade, are beginning to appear with doctrines of humanitarian aid and humanitarian corridors. We all know where they come from.

To strengthen the criterion that the Cuban government is not capable of getting out of this situation, as if they were so interested in solving the health problems of our people.

Is that not genocide, is that not a crime against humanity? Criteria are raised that we are a dictatorship, a dictatorship that is concerned about giving its entire population health, that seeks the good of all, that in the midst of these situations is capable of having programs and public policies for everyone, that is aspiring to vaccinate everyone with a Cuban vaccine, because we knew that nobody was going to sell us vaccines and we had no money to go to the international market to buy vaccines. What a strange dictatorship!

Now they are shouting that we are murderers. Where are the people murdered in Cuba, where are the disappeared?

Because the other countries that have suffered these events of pandemic peaks were not attacked in the media and humanitarian intervention was not put to them as a solution, nor were they subjected to these campaigns of discredit that they have tried to mount against us.

Life, history, and facts show what is behind all this: their intention to asphyxiate and put an end to the Revolution, and that is why they are trying to discourage our people and confuse them. When people are in severe conditions like the ones we are living, events like the ones we saw today in San Antonio de Los Baños occur.

In San Antonio de Los Baños, a group of people gathered in one of the most central parks of the city to protest and make demands. Who were these people? They were made up of common people with discontent with the shortages and difficulties; they were revolutionaries who may be confused and who may not have all the arguments or who were expressing their dissatisfaction.

Those two groups of people did it in a different way, and they were looking for an argument and asking for an explanation. The first thing they would say was, "I am a revolutionary" "I support the Revolution".

This was led by a group of manipulators who were lending themselves to the designs of those campaigns that came out in the social network, such as the famous SOSMatanzas or SOSCuba, the call for a "cacerolazo" (Pot banging) so that in several cities of Cuba there would be demonstrations of this type and social disturbances.

This is very criminal, very cruel, especially at this time when we must get people to stay in their homes and protect themselves. With the morale given by the Revolution, the revolutionaries of San Antonio de los Baños, the authorities of the province, a group of comrades from the leadership of the country we went to San Antonio de los Baños.

While this is happening, we know that there are other places in the country where groups of people have gathered in certain streets and squares, also moved by such unhealthy purposes.

We call on all revolutionaries to take to the streets to defend the Revolution everywhere.

The streets belong to the revolutionaries, and the State has all the political will to dialogue, but also to participate.

We are not going to surrender the sovereignty, nor the independence of this nation, They have to step over our corpse if they want to overthrow the Revolution.