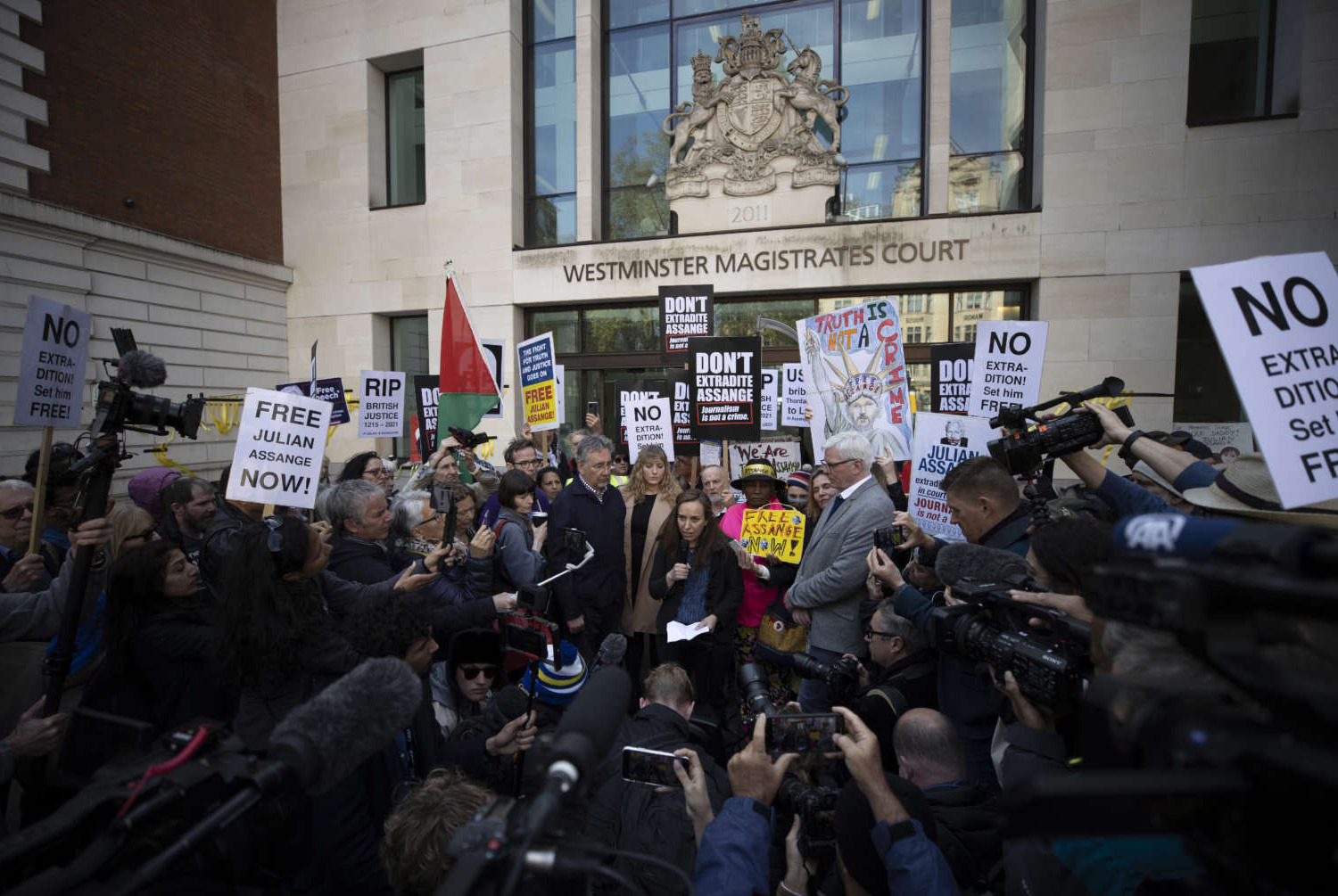 Ever since U.K. Home Secretary Priti Patel formally ordered the extradition of WikiLeaks founder Julian Assange to the U.S. last week, press freedom advocates around the world have been mobilizing.

Assange Defense, on whose advisory board I serve, is organizing a national and international campaign to pressure U.S. Attorney General Merrick Garland and President Joe Biden to drop the extradition request and dismiss the charges against Assange. The stakes could not be higher.

The charges, which include 17 counts under the infamous Espionage Act, could result in 175 years in prison for the journalist who exposed U.S. war crimes.

Last week, Assange’s brother, filmmaker Gabriel Shipton, wrote in an email to Truthout: “UK Home Secretary has decided today that any publisher who exposes national security information of an allied country may face extradition to two lifetimes in prison.  Julian will appeal this decision and this once in a lifetime fight for freedom of the press continues.”

Assange’s indictment is based on WikiLeaks’s 2010-2011 disclosures of U.S. war crimes in Iraq, Afghanistan and the military prison at Guantánamo. Those revelations included 400,000 field reports about the Iraq War; 15,000 unreported deaths of Iraqi civilians; and systematic rape, torture and murder committed by Iraqi forces after the U.S. military “handed over detainees to a notorious Iraqi torture squad.”

WikiLeaks also disclosed the Afghan War Logs, which are 90,000 reports of more civilian casualties by coalition forces than the U.S. military had admitted to.  And its revelations additionally included the Guantánamo Files, 779 secret reports showing that 150 innocent people had been held there for years and documenting the torture and abuse of 800 men and boys in violation of the Geneva Conventions and the Convention Against Torture and Other Cruel, Inhuman or Degrading Treatment or Punishment.

Assange’s indictment is based on WikiLeaks’s 2010-2011 disclosures of U.S. war crimes in Iraq, Afghanistan and the military prison at Guantánamo.
WikiLeaks also published the notorious “Collateral Murder” video, which documented how in 2007, a U.S. Army Apache helicopter gunship targeted and fired on unarmed civilians in Baghdad. At least 18 civilians were killed. They included two Reuters reporters and a man who came to rescue the wounded. Two children were injured. Then, a U.S. Army tank drove over one of the bodies, severing it in half. That video contains evidence of three separate war crimes that are prohibited by the Geneva Conventions and the U.S. Army Field Manual.

As several civil liberties and human rights organizations declared in October 2021, when they asked Garland to dismiss the case against Assange, his prosecution poses a significant threat to First Amendment freedom of the press.

“The UK’s decision to extradite Julian Assange to the nation that plotted to assassinate him — the nation that wants to imprison him for 175 years for publishing truthful information in the public interest — is an abomination,” wrote Noam Chomsky, Daniel Ellsberg and Alice Walker — co-chairs of Assange Defense — in reaction to Patel’s extradition order.  “The U.S. government argues that its venerated Constitution does not protect journalism the government dislikes, and that publishing truthful information in the public interest is a subversive, criminal act.  This argument is a threat not only to journalism, but to democracy itself.”

Trevor Timm, executive director of Freedom of the Press Foundation, warned that if Assange is extradited to the United States and convicted of the charges against him, it “would potentially make receiving classified information, asking for sources for more information, and publishing certain types of classified information a crime.” Timm noted, “Journalists, of course, engage in all these activities regularly.”

Moreover, Assange has suffered psychological torture while confined in the U.K. for more than a decade, according to Nils Melzer, United Nations special rapporteur on torture. In December 2021, Melzer tweeted that the “U.K. is literally torturing him to death.”

On June 10, more than 300 doctors, psychiatrists and psychologists calling themselves “Doctors for Assange” wrote to Patel that Assange’s “deteriorating health” made it “medically and ethically unacceptable” to extradite him.

“Julian’s 13-year persecution culminates in a decision of ostentatious callous indifference,” John Shipton, Assange’s father, told Truthout. “Who amongst us would not burn with indignation and loathing?”

Stella Assange, who recently married Julian in prison, called Patel’s decision “a dark day for press freedom and for British democracy.” She told the Associated Press, “Julian did nothing wrong. He has committed no crime and is not a criminal. He is a journalist and a publisher, and he is being punished for doing his job.”

Yet U.K. officials disregarded Assange’s health and the injustice of his prosecution, insisting that the U.S. would treat him “appropriately.” In its June 17 statement ordering Assange’s extradition, the U.K. Home Office wrote:

In this case, the UK courts have not found that it would be oppressive, unjust or an abuse of process to extradite Mr Assange. Nor have they found that extradition would be incompatible with his human rights, including his right to a fair trial and to freedom of expression, and that whilst in the US he will be treated appropriately, including in relation to his health.

But after a three-week evidentiary hearing, U.K. District Judge Vanessa Baraitser ruled in January 2021 that if Assange were extradited to the United States, he would likely attempt suicide because of his mental state and the onerous conditions of confinement in U.S. prisons.

Assange now has until July 1 to appeal Patel’s decision and will apply to the High Court to reverse Baraitser’s rulings on other issues Assange raised at the extradition hearing.

Amnesty International’s Agnes Callamard — former UN special rapporteur on extrajudicial, summary or arbitrary execution — was skeptical of the so-called assurances that Assange would be treated humanely in U.S. custody. “Diplomatic assurances provided by the U.S. that Assange will not be kept in solitary confinement cannot be taken on face value given previous history,” Callamard said, referring to the U.S. reneging on past extradition assurances.

Assange now has until July 1 to appeal Patel’s decision and will apply to the High Court to reverse Baraitser’s rulings on other issues Assange raised at the extradition hearing. They include:

The U.S.-U.K. extradition treaty prohibits extradition for a political offense and “espionage” is a political offense; Extradition is forbidden as the U.S. request is based on Assange’s political opinions; The request for extradition is an abuse of process as it was made for a political motive and not in good faith;
Extradition would be oppressive or unjust because so much time has passed; The charges against Assange do not comply with the “dual criminality test” because they encompass acts that are not criminal offenses in both the U.S. and the U.K.; and Extradition would violate Assange’s rights to free expression and a fair trial, in addition to the prohibition against inhuman and degrading treatment in the European Convention on Human Rights.

Assange will also raise on appeal the CIA’s plot to kidnap and assassinate him while he was in the Ecuadorian Embassy under a grant of asylum.

If Assange loses his appeals to the U.K. High Court and Supreme Court, he could appeal to the European Court of Human Rights.  The appeals could take several months or even years.   The extradition, trial and conviction of Julian Assange would have frightening ramifications for investigative journalism.

The indictment against Assange has been assigned to U.S. District Judge Claude M. Hilton, who jailed former U.S. Army intelligence analyst Chelsea Manning in 2019 for refusing to appear before a federal grand jury investigating Assange. The indictment charges that Assange conspired with Manning to gain access to a government computer.

This is the first time the United States has prosecuted a journalist or media outlet for publishing classified information. The extradition, trial and conviction of Julian Assange would have frightening ramifications for investigative journalism. On June 17, the editorial board of The Guardian wrote, “This action potentially opens the door for journalists anywhere in the world to be extradited to the U.S. for exposing information deemed classified by Washington.”

Marjorie Cohn is professor emerita at Thomas Jefferson School of Law, former president of the National Lawyers Guild, and a member of the national advisory boards of Assange Defense and Veterans For Peace, and the bureau of the International Association of Democratic Lawyers. Her books include Drones and Targeted Killing: Legal, Moral and Geopolitical Issues. She is co-host of “Law and Disorder” radio.