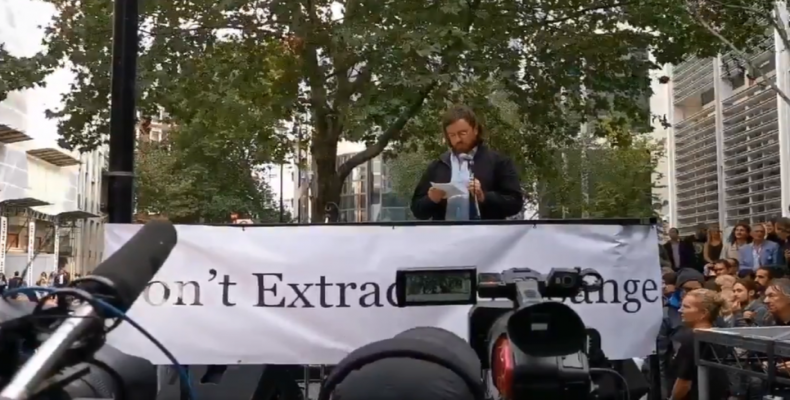 Speaking at a rally outside the British Home Office in Westminster at a rally for Assange, Shipton described an emotional visit to his weakened and emaciated brother, currently serving a 50-week sentence at Belmarsh prison, ostensibly for skipping bail in 2012.

After embracing his brother for what he thought may be the last time, Shipton described speaking to his daughter afterwards, who wondered why her uncle was locked up.  “‘Has he done something bad, dad?’ she asked.  I struggled to explain in a way a five-year-old would understand.”

Though Assange is being held on a bail violation, his supporters argue that the sentence is merely a holding period until his eventual extradition to the U.S. is arranged.  There the WikiLeaks editor faces up to 175 years in prison for the alleged possession and dissemination of classified information exposing potential U.S. war crimes.

Joining Shipton at Monday’s rally were veteran journalist John Pilger and Pink Floyd frontman Roger Waters, who performed a rendition of his classic track ‘Wish You Were Here’ in honor of Assange.