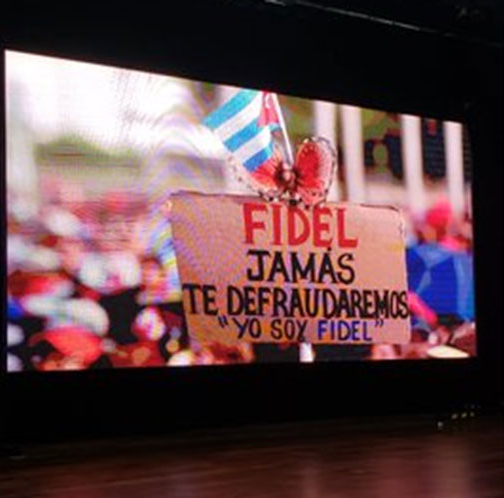 Entitled 'El profeta del amanecer' (Dawn Prophet), the audiovisual pays homage to Fidel on the 95th anniversary of his birth this August 13th.

Directed by filmmaker Omelio Borroto, the documentary film compiles anecdotes and the experiences of renowned Cuban and foreign personalities with Fidel, offered at different moments.

Renowned intellectuals like Argentinians Atilio Borón and Stella Calloni, and Spaniard Ignacio Ramonet stressed that Fidel is a permanent source of inspiration for progressive governments and forces throughout the Americas and beyond.

It was Stella Calloni who described Fidel as a ‘dawn prophet’ and that phrase was used as the title of the documentary, where the revolutionary leader appears with his people in the most difficult moments that the Cuban Revolution has gone through, including the burial ceremony for the victims of the 1976 terrorist bombing of a Cuban passenger flight off the coasts of Barbados and the acute economic crisis in the 1990s –known in Cuba as the ‘Special Period.’

The testimony of Casa de las Américas president Abel Prieto stands out. He speaks about Fidel’s tireless efforts to achieve an inclusive political culture, free from taboos and prejudices.

In the audiovisual, other renowned Cuban artists, like painters Diana Balboa and Nelson Domínguez, and singer-songwriter Amaury Pérez speak about their profound admiration for the revolutionary leader.

The documentary film ends with the posthumous tribute to Fidel by his people, millions of Cubans on the island, who are determined to honor and continue his vast legacy.