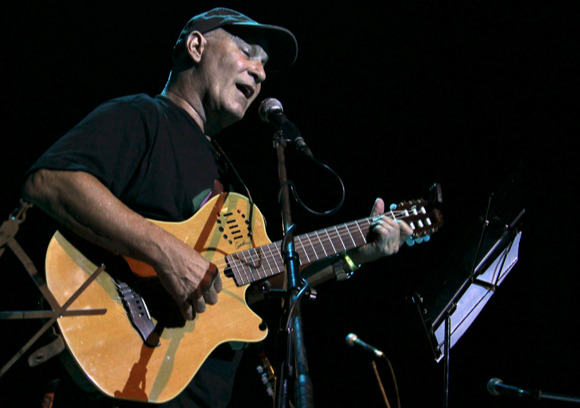 Cuban singer-songwriter Vicente Feliú has died in Havana at the age of 74.

Havana, December 17 (RHC)-- Cuban singer-songwriter Vicente Feliú has died in Havana at the age of 74.

An integral part of the Nueva Trova movement -- the New Song movement of the 1960s and 70s, Vicente worked with Silvio Rodríguez, Noel Nicola, Lázaro García and Augusto Blanca, among others.

Vicente Feliú was the older brother of fellow singer-songwriter Santiago Feliú, who died in 2014.

Vicente Feliú has gone "as if by lightning".  He was about to sing at the Museo de la Música when a massive heart attack took him away, at the age of 74, as painful as it may be, forever.

But there are many forever in what will continue to be the life of the troubadour, who chose the intelligent word to write the song.  Sensitive to the beauty and the cry of humanity, he starred in a way of saying that showed the moral stature of his heart, committed to justice and the betterment of his fellow men.

Together with the best known exponents of the new Cuban trova, Vicente's voice was raised, which not only increased the value of the artistic movement, but also led it in its leadership missions.

Author of fundamental themes for theater and television, he composed lyrics such as Créeme, which would have been worth to live forever in the memory of his people; but Vicente did not know conformism.  Faced with the struggle for a better world, from the environment in which he was given to live, he was tireless.

Active on social networks, he used to offer his criteria that showed the solidity of a lucid and illustrious thought, and before the Internet users who defended Cuba and its projects, he wrote a word: "ovation", that word that today stands out when we think of him singing forever, because those who have lived to illustrate the stages with greatness do not die.