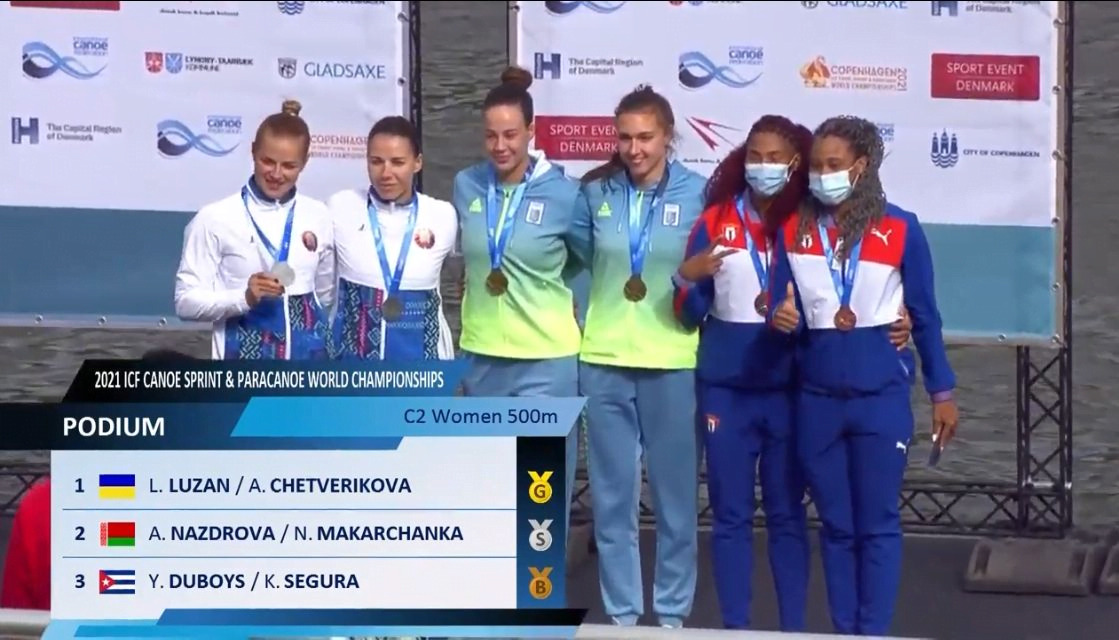 Women's C2 award ceremony at the World Championships in Denmark

Havana, September 18 (RHC)-- Cuban canoeing made history at the world championship in Copenhagen, Denmark, by winning its first medal in the women's category and achieving another medal with its emblematic men's tandem canoe.

Again the biggest applause went to the C2 girls, Yarisleidis Cirilo and Katherine Nuevo, winners of the bronze at 500 meters, for the first medal of Cuban women's canoeing in the history of the world championships.

"We are super happy. Being the first Cuban women medalists in this sport is a great satisfaction and a challenge. Now every time we go out (to paddle) we will try to improve the result," said Cirilo (19 years old) in statements to the group team Vívela on social networks.

"We thought we had come in fourth or fifth, but when we looked at the screen and saw our flag in third place we started crying with happiness. It was a very tough regatta," she added.

For her part, Katherine, just 18, was equally happy with the remarkable result and said she competed with less stress and more relaxed than in Tokyo, where she could barely fall asleep the day before the final.

"I felt a little bit nervous, but not like other times, because my best friend (Cirilo) was by my side and always encouraged me," said Katherine, who thanked everyone for their support.

The Cubans, sixth at the Tokyo Olympic Games a little over a month ago, clocked 1:57.70 min, to escort on the podium the champions, the Ukrainian gold medalists Luzan-Chetverikova (1:55.85) and the Belarusian Nazdrova-Makarchanka (1:57.12).

"We wanted the gold, it's the only medal we're missing at worlds, but we're not really in great shape anymore. Our fitness was for the Olympics. The world championships was a box of surprises. Anyway, we won another medal," multi medalist Serguey Torres told Radio Habana Cuba.

The other Cuban finalist of the day, José Ramón Pelier, achieved a meritorious seventh place in the C1 1000m with 3.58.29.

With Saturday's two medals, Cuba now has 22 in the history of the world canoeing championships, 3 of them gold.

Serguey Torres confirmed himself as the top Cuban medal winner with 10 medals (0-6-4).

This Sunday, Cuban canoeists will try to continue making history by paddling in five finals. Pelier will return in the C1 500m, Dayán will do it in the C1 5000m, and Yarisleidis Cirilo will do the feat of competing in all possible finals (C2-200m together with Katherine Nuevo, as well as in the C1 200m and 5000m.