Cuban Taekwondoca in the semifinals of the World Poomsae Championship 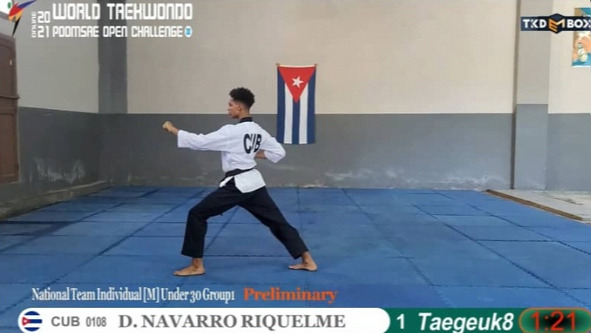 Havana, October 14 (RHC/JIT)-- Dario Navarro Riquelme, leader of poomsae in Cuba, is in the semifinal for under 30 years old of the Online World Taekwondo Poomsae Open Challenge III.

The competition for exponents of imaginary combat in national teams and also open category began with the presence of more than two thousand taekwondocas and will have definition on the 31st of this month.

Darío, an 18 year-old youth who is competing for the first time among seniors, left on the way stars such as the Philippine several times world champion Rodolfo Reyes.

He enters fifth in the competition for 16 athletes of national teams from which the eight medal contenders will emerge in a circuit that gives points for the World Cup in April 2022 in China.

"This Tuesday we recorded one of the poomsaes that the judges will evaluate for the round that will give the eight finalist athletes," Enrique, Dario's father, told JIT, with coach category and who is advised remotely -due to covid-19- by the main trainer of the national team Carlos Regalado.

"We have received a lot of collaboration from Inder cienfueguero, from professors Regalado and Rolando Ignacio, from their first coaches here," he said.

"We recorded at the Escuela de Iniciación Deportiva Jorge Agostini, in Cienfuegos. You have to be very meticulous in these recordings, because you can be disqualified for the quality of the image," said the professor of the Faculty of Foreign Languages of the University of Cienfuegos.

Darío is the only representative of the Cuban team of the discipline in the online competition, which did not hold its 2020 edition due to the pandemic.

The Open Challenge III is part of a prestigious circuit that has as its highlight the "duels" between stars representing nations and the open, in which practitioners of the Korean martial art can participate without distinction of age or sex.

The poomsae was called together with the Kyorugui (combat) for the Olympic Games in Paris, scheduled from May 4 to July 27, 2024.