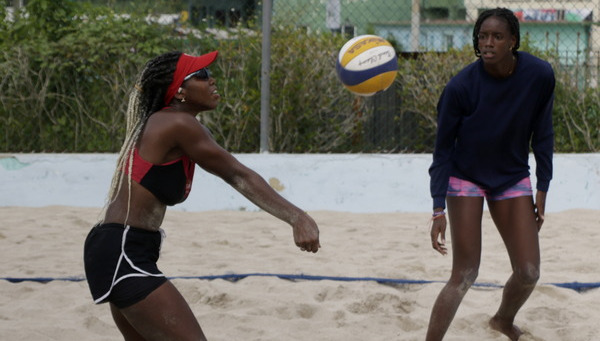 Havana, November 2 (JIT)-- Beach volleyball players Lázara Madan and Dayani Zerquera, who will represent Cuba in the I Pan American Junior Games of Cali 2021, showed as fast as an effective slam that they are daring and that strong commitments are faced with decision.

The 21 and 22 year-old girls from the capital, respectively, base their goal of reaching the podium on the careful and stable work on the court and in the gymnasium of the National Volleyball School that they have been doing since they returned from Boca Chica with the ticket for the event set for November 25 to December 5.

Both say they feel much better than when they attended the qualifying tournament held in the first week of July in the Dominican resort, which represented their debut in the international arena.

There they won the fourth ticket of the six assigned to the North, Central American and Caribbean Confederation (Norceca). They won consecutively against the hosts, as well as the teams from El Salvador, Nicaragua and Guatemala.

Already somewhat exhausted by the low physical level, given the long time without training due to the covid-19, moments in which technical deficiencies surface more, they fell against Mexico 0-2 in the semifinals and 1-2 against Canada for the bronze.

"This time we think it will be different, although the six South American countries are joining us. We are much better, the training has been very strong and we are no longer alone, now we have Yanary Duquesne and Teresa Padrón in the "bubble" who are helping us a lot", explained to JIT Lázara, the most lanky and who has worked insistently on the placement in the blocking.

"Also professor Osvaldo Abreu has been very persistent in serving and attacking. Undoubtedly we have made progress, we are happy and that motivates us to aspire to a medal, and fight harder to reach the top in this sport in the future," she said.

For Dayani, returning to the beach has meant a major sacrifice after four years focused on studying and only participating in university tournaments. However, the seasoned coach rescued her in view of the qualifiers.

Little by little, from 80 kilos, she dropped to 72 "to show off her athlete's figure again" as "teach" Abreu jokingly says, but pleased with the progress of the smallest in stature of the duo.

"This stage has been very intense, more physical, the loads have increased, as well as the technical work on the field. I think that with what we are doing we are going to have a good result in the Games, we can think bigger", he said, but aware that there are still details to be ironed out and not to give up if they want to give a joy to the volleyball family and the fans in general.

Close to them is the young psychologist Karidia Sidibé, who affirms that "the preparation is going well, I have achieved all the objectives I have set myself so far, we still have some things to do in terms of tactical thinking and to finish something we are doing for emotional control and some sessions that help cohesion, to better adjust the couples from the tactical and also the affective point of view".

Taking into account the competitive inexperience of this duo, the specialist pointed out that with them the work is greater so that they develop more psychologically.

"The level in these Games will be higher and this is a sport that requires a lot of perseverance, because they face adverse conditions such as wind, sometimes rain or a lot of sun, so I have been working on the development of volitional qualities. Self-efficacy is the variable that best predicts performance and if they achieve the level in that aspect, in what they are capable of doing, maybe they will surprise us in Cali".

Cuba debuts on November 30 against the duo from Argentina, one day later they play against the US Virgin Islands and close the preliminary against the locals in group A of the four groups formed. The first two places in each group will advance to the quarterfinals and achieving it is the first goal of Lázara and Dayani to fight to make their dream come true: to climb to the podium.