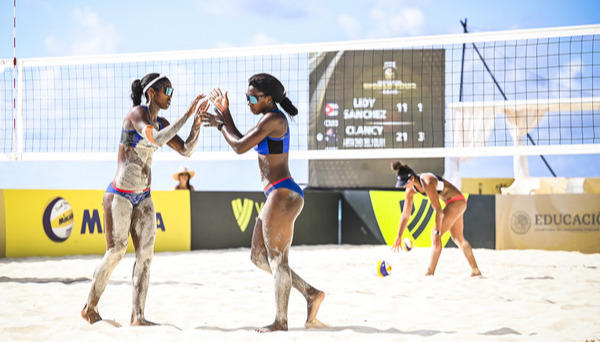 Havana, May 2 (RHC)-- The Cuban duo of Lidianny Echevarría and Yanileydis Sánchez finished in fifth place at the last stop of the World Beach Volleyball Circuit, their best performance in the three events held in Cancun and of a Cuban duo in recent years in these competitions that are organized annually.

At the beginning of Saturday's match, the Cuban duo fell in the quarterfinals by 0-2 sets (11-21, 17-21) against Australia's Taliquia Clancy and Mariafé Artacho del Sol, fifth in the world ranking and bronze medalists at the world championship in Hamburg 2019.

Lidy and Yani also surpassed their performance in the two previous series, when they debuted in this circuit with the ninth and seventeenth places, respectively.

The Cuba-B pair started the qualifiers of this stop with a 2-0 (21-17, 21-11) win over Raisa Schoon and Katia Stam of the Netherlands to reach the main draw of 32 contestants.

In group H, they opened with a masterful performance by defeating China's Fan Wang and Xinyi Xia, 13th in the world ranking and 17th in the 2019 World Championship, after a convincing 21-16 and 21-12 win.

However, they then fell victims 0-2 (21-14 and 23-21) to the representatives of the Netherlands, Marleen van Lersel and Pleun Ypma, which forced them to then dominate 2-0 (25-23, 21-15) the Argentines Ana Gallay and Fernanda Pereyra, whom they had already beaten in the previous two phases.

In the 16 th round on Friday night, they scored another victory over Sanne Keizer and Madelein Meppelink of the Netherlands, this time by 21-16 and 21-18 to be included among the best eight pairings.

The main duo of Leila Martinez and Maylen Delis (Cuba-A), after taking ninth place in the first round, could not qualify to the main draw in the other two rounds.

The girls, together with their coach Alain Hernandez, begin their return in an extensive tour that will take them first to Paris before arriving in Havana, where they will continue their preparation in the "bubble" of the National Volleyball School with a view to the Pre-Olympic Games in Mexico in June.