Arlenis optimistic for the World Cycling Championships in Australia 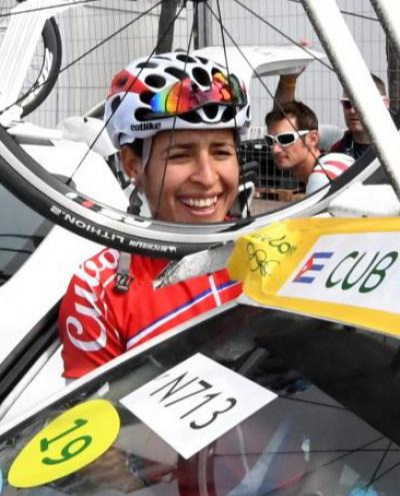 Cuban cycling star Arlenis Sierra signed a two-year contract (2022-2023) with Movistar, one of the most prestigious clubs in cycling and where the phenomenal Annemiek Van Vleuten rides.

The event, of 164.3 kilometers, will start at 12:25 noon on Saturday at the venue, Friday night in Cuba. The Cuban thinks the course will be stronger than last year's in Belgium, when she finished fifth.

"I arrived Thursday night and I'm adapting to the schedule. I've been training, I'm even quite close to the hardest part where the route passes," the 29-year-old Manzanillera, with experience since 2017 in clubs in Europe, commented to JIT.

"I think I'm fine for Saturday's race, just like when I competed in the 2021 world competition," said Arlenis, who this year is part of Movistar, world team category, the largest of the International Cycling Union's elite, and has participated as a teammate of Olympic and world title holder Annemiek van Vleuten. This has demanded her not only physically, but also mentally, to comply with the strategies against strong rivals. They have achieved outstanding results.

"Annemiek has taken it all," he said with joy, referring to the resounding successes of the Dutchwoman in the biggest stage competitions of the world tour: the Giro a Italia, the Tour de France Women and the Ceratizit Challenge by La Vuelta (Spain), in which the Cuban confirmed her talent and the confidence of an exceptional cyclist like Van Vleuten.

Although in the world competition they will compete for their respective countries, and Arlenis will once again ride alone, from the start she will focus her attention on the jerseys of Italy and the Netherlands, the favorite squads to fight for the podium, without forgetting other luminaries from Denmark, Germany, Poland, Belgium, Austria, Switzerland and the host nation.

"The race will be logically difficult, it includes a long eight-kilometer hill and then a circuit that will be given six laps with another elevation," he explained. Nevertheless, Arlenis has shown this season that he is "disrespecting" the climbs, which are paramount in a road race.

Sierra, who this year won the Vuelta a Andalucía, an occasion when she was the Movistar leader due to Annemiek's absence, will add with this her fifth world road event. In 2018 he finished 27th and in the following years in 12th, 39th and fifth place. In 2020 she also raced the individual time trial and finished 23rd.

In 2021 the champion was Italy's Elisa Balsamo, escorted by multiple Olympic and world medalist Marianne Vos of the Netherlands and Poland's Katarzyna Niewiadoma. Behind them were Hungary's Blanka Vas Kata and Arlenis.

In the opening of this edition, in the elite individual time trial (34.2 km) held on September 18, another Dutch rider, Ellen van Dijk, confirmed her hegemony with a time of 44.29 minutes. The second best time went to Australia's Grace Brown, 12 seconds behind the winner.

In third place was the Swiss Olympic runner-up in Tokyo 2020 in this specialty, Marlen Switzerland, 41 seconds behind. This kept her on the podium, as she was the silver medalist in the two previous world championships.

Annemiek, winner at Tokyo 2020 and bronze medalist at the 2021 world championships, finished a surprising seventh, one minute and 43 seconds behind her compatriot.

"Unfortunately, it wasn't my best day on the bike. I have no idea why I didn't have the power I normally have in this event," tweeted the rider, who on Wednesday suffered a huge crash due to a front tire failure just as she was starting between her two teammates in the mixed time trial.

The rider herself announced from the hospital that "stable elbow fracture, no surgery is needed. I can ride a bike, but it depends on the pain and I need to be sensible. I hope I can sleep".

For Annemiek, Tokyo 2020 Olympic runner-up on the road, her chances of running on Saturday are uncertain, but it will not be surprising to see her on the start line.