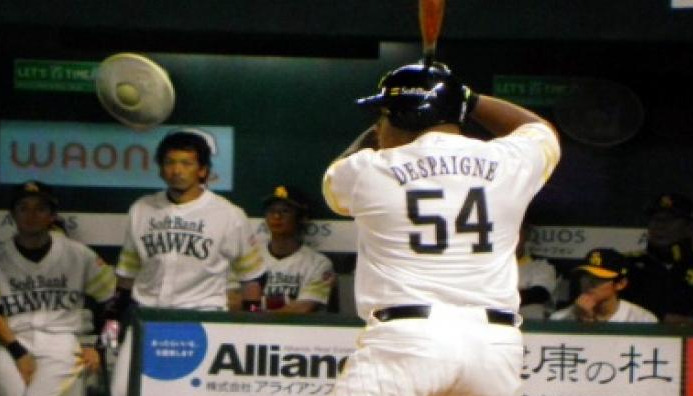 Tokyo, October 1 (PL)-- Alfredo Despaigne hit his 14th home run of the season, hit a home run in four innings and towed in a run at the highest level of professional baseball in Japan.

The Cuban slugger, now with a .274 offensive average and 40 RBIs, contributed to the 5-1 victory of the SoftBank Falcons over the Rakuten Eagles, as did his compatriot and teammate Liván Moinelo.

The left-handed pitcher was once again unhittable at Sendai's Rakuten Seimei Park as he struck out two of the three opposing batters in a perfect inning of relief to improve his ERA to 1.05.

In other games on Friday, Cuban Dayan Viciedo also went 4-2, with a double, a single and three RBIs, in the Chunichi Dragons' 6-1 victory over the DeNA All-Stars.

The starter extended his consecutive hit streak at Yokohama Park to 12, raised his average to .294 and his total number of runs batted in to 62.

The Yakult Swallows, meanwhile, beat the Hiroshima Carp 5-1 at the Mazda Stadium in Hiroshima, and at the Kyocera Dome in Osaka, the Orix Buffaloes won 4-3 against the Lotte Marinos.

The regular calendar of the Japanese Professional Baseball League, or NPB, will conclude on October 3 and the Swallows (79-59) and Stars (77 and 66) have the ticket to the postseason for the Central League.

In the Pacific, the SoftBank Falcons (76-63) are first and the Buffaloes (75-65) are second, both with a ticket to the next round.

The other berth in each circuit is contested by the Hanshin Tigers, Yomiuri Giants and Carp for the Central, and on the other side by the Seibu Lions and Eagles.

The leaders advance directly to the final of each league, while the second and third of the same circuit meet in a best-of-three series to dispute the title.

The Golondrinas lifted the trophy last season over the Orix Buffaloes, in a series they dominated four games to two.