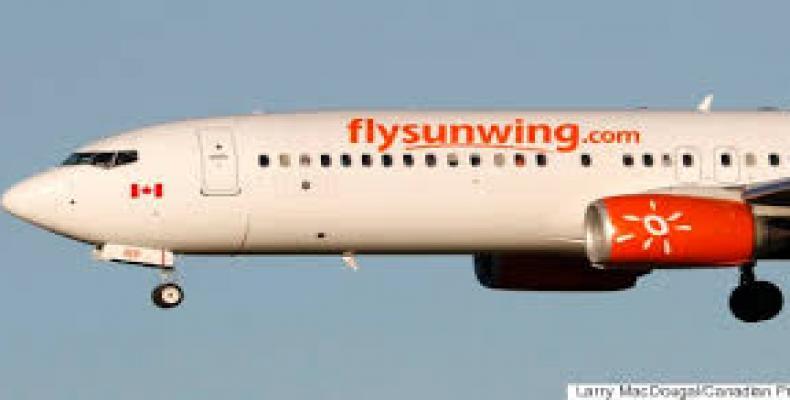 Santa Clara, November 4 (RHC-ACN)-- Sunwing Airlines inaugurated a flight between Toronto, Canada and Santa Clara this week with tourists visiting the central part of the country through the Abel Santamaria International Airport.

A total of 164 passengers arrived to the central Cuban city, among them tour operators and travel agents for a two day stay at the Santa Maria Key Complex with the objective of learning about the area and the recovery of the beautiful sun and beach area after Hurricane Irma.

The Cuban Tourism councilor in Toronto, Eloy Gobea told the Cuban News Agency, ACN, that the importance of this flight is that 30 percent of the Canadians that travel to Cuba visit the keys to the northeast of the central province.

He added that another similar group is currently touring Cayo Coco with excellent results. The head of Operations in Villa Clara, Granitem Forte said that the air terminal is ready to step up its operations as the influx of passengers increase during the high season.

Villa Clara is working for a positive period in the arrival of visitors both in Cayo Santa Maria with a product of sun and beach as well as the circuit that includes Remedios and Santa Clara, said Regla Dayami Armenteros, Representative of the Tourism Ministry in the province.

She added that work is underway in increasing the hotel installations and getting ready for the International Tourism Fair next May to be held in the keys north of Villa Clara.

Among some of the work underway is the expansion of tourism spots in Sagua la Grande with investments in the coastal town of Isabela.