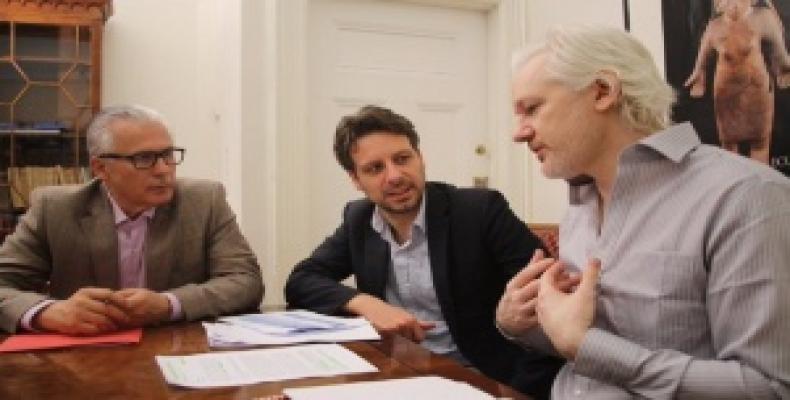 London, November 15 (RHC)-- In London on Monday, prosecutors were finally able to question WikiLeaks founder Julian Assange about a possible sex crime in Sweden six years ago.  They did not comment on the closed-door proceedings at the Ecuadorean Embassy in London where Assange has lived for more than four years to avoid extradition to Sweden and possibly to the United States.

The long-delayed interview is expected to continue Tuesday and possibly extend beyond that. Assange's version of events, and a possible DNA sample, will shape Swedish prosecutors' decision on whether to charge him.

The questioning was being led by an Ecuadorean prosecutor in the presence of Swedish prosecutor Ingrid Isgren and a Swedish police investigator.  Swedish officials are seeking information related to allegations of sexual misconduct made by two Swedish women Assange met in 2010.  Some of the alleged misconduct is no longer being investigated by police because of the statute of limitations.

Assange is, however, being questioned about the possible rape of one of the women who complained to authorities.  He has not been indicted or charged but is the subject of an international arrest warrant.   Prosecutors say no immediate decision on the future of Assange's case will be made on Monday.  They also said no public statements will be made after the questioning.

Assange has denied wrongdoing and says he fears being extradited to the U.S. because of his WikiLeaks work.  There is speculation that he faces a secret grand jury indictment in the United States.

Making sure Julian Assange did not escape from the Ecuadorian embassy has been an operation that has cost the U.K. police over US$18 million.