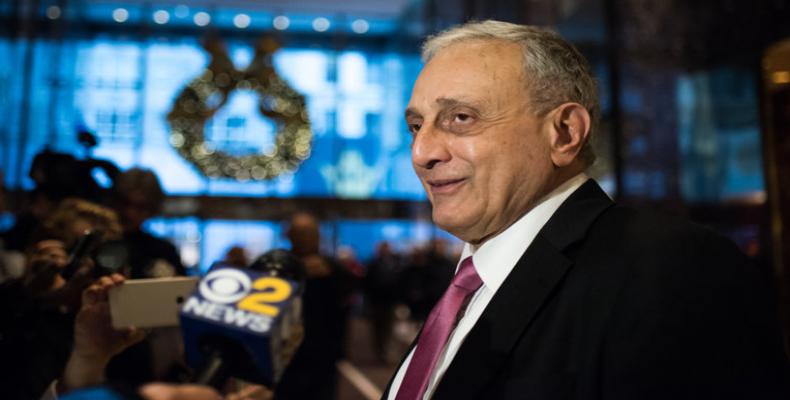 Paladino, a Buffalo real estate developer, let loose a series of offensive statements about the Obamas in the New York arts publication Artvoice.  The outlet asked Paladino: "What would you most like to happen in 2017?"

His response: "Obama catches mad cow disease after being caught having relations with a Herford. He dies before trial and is buried in a cow pasture next to [senior White House adviser] Valerie Jarrett, who died weeks prior, after being convicted of sedition and treason, when a Jihady cell mate mistook her being a nice person and decapitated her."

Asked "What would you like to see go in 2017?" Paladino attacked the first lady in sexual and racist terms:  "Michelle Obama.  I'd like her to return to being a male and let loose in the outback of Zimbabwe where she lives comfortable in a cave with Maxie, the gorilla."

Paladino has verified to The Buffalo News that his comments were real, attacking the newspaper for inquiring about them.  "Of course I did," he said when asked if he had uttered the remarks. "Tell them all to go f--- themselves."  And referring to one of the newspaper's Black columnists and editors, he added: "And tell that Rod Wilson I made that comment just for him."

Paladino called Obama the worst president in U.S. history and accused him of "putting criminals back on the streets."  The Trump supporters said: "Yeah, I'm not politically correct.  They asked what I want and I told them."

Condemnation of the remarks was swift on social media and among elected officials around the state.  The local county executive called for Paladino to immediately resign his post on the Buffalo school board.

Governor Andrew M. Cuomo, a Democrat who defeated Paladino in 2010, called the comments "racist, ugly and reprehensible."  He said in a statement that Paladino had a "long history" of making similar comments and that he had "embarrassed the good people of the state with his latest hate-filled rage."

Paladino conducted several media interviews, framing his comments about the Obamas as "old-style humor" in an interview with a Buffalo television news station and as an effort to draw attention to the president's "transgressions" in a telephone interview with The New York Times.

Carl Paladino, in the interview with The Times, disputed the notion that his comments were racist.  Asked why he wanted to see the first lady live with a gorilla in Africa, he paused for a long time, then said: "What's wrong with that?"