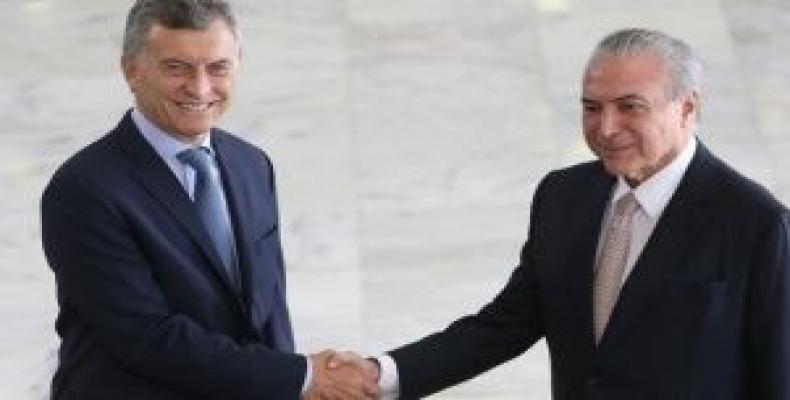 In Macri’s first official state visit to Brazil, he stressed that “in the face of so many doubts that the world raises, we have to be allies of the 21st century.”  Macri also spoke of the need strengthen MERCOSUR and extend relations with Mexico and the European Union, as well as plans to start trade cooperation with other countries including Canada, Japan, South Korea and Switzerland.

To help smooth relations in the bloc, both presidents are expected to sign a “road map” for the future of MERCOSUR and are hoping to address issues of trading sugar and ethanol as well as border security, the development of science and technology and defense.  Macri and Temer have been key in steering MERCOSUR away from its focus on anti-imperialism and regional integration under their left-wing predecesors and toward neo-liberal economics.

Temer said that the meeting was a way of further strengthening ties between the two neighbors, saying the countries “have similar ways of facing the challenges.”  Brazil is Argentina’s biggest market for exports and Argentina is Brazil’s third largest trading partner behind China and the U.S.  In recent years, however, trade between the two countries has been declining.

Argentina currently holds the leadership of MERCOSUR for the first six months of 2017 before it will be taken over by Brazil.  Both presidents have led, along with Paraguay, the push for Venezuela's expulsion from the trading bloc, which Caracas maintains is a right-wing led coup that ignores the fact that the country has been adhering to the bloc's regulations.

Amid rising prices, high unemployment and recession — Brazil’s worst in history — both Temer and Macri have low approval ratings and have been pushing austerity measures in their countries.

Temer became president after Dilma Rousseff was impeached in a parliamentary coup last year, and his party continues to be plagued by its involvement corruption scandals.