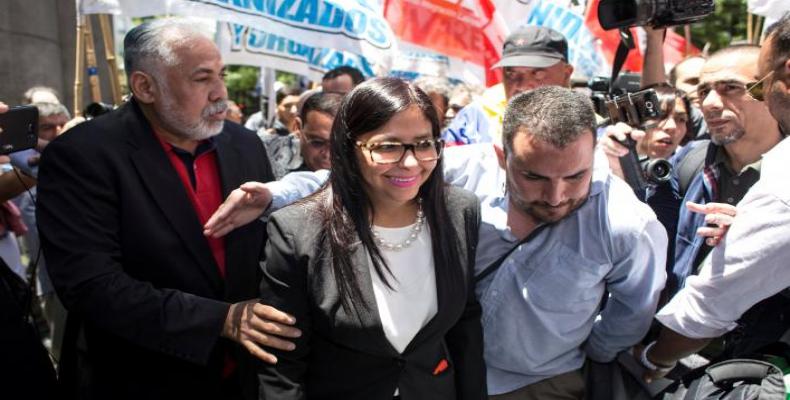 Buenos Aires, December 15 (RHC)-- A special meeting of foreign ministers from the South American economic bloc MERCOSUR was abruptly suspended Wednesday in Buenos Aires as the Venezuelan top diplomat Delcy Rodriguez tried to attend the gathering and was attacked by an Argentinean police officer.

Delcy Rodriguez traveled to Argentina to take part in the discussions of a beginning-of-year action plan, despite claims by Argentina, Brazil and Paraguay that she had not been invited.

The Venezuelan top diplomat, accompanied by her Bolivian counterpart David Choquehuanca, addressed media outside the Foreign Ministry of Argentina and said she was exercising her country's full right to attend the meeting as Venezuela holds the pro tempore chairmanship of the sub-regional bloc.  Argentina, Brazil and Paraguay — dubbed the "Triple Alliance" by the Venezuelan government — claim Venezuela has been suspended and that Argentina now holds the rotating presidency.

Chaos erupted at the packed entrance of the diplomatic headquarters, where a group of demonstrators and journalists were also gathered, as Rodriguez passed through the crowd and was attacked by a police officer.  The Bolivia's deputy foreign minister tried to protect Rodriguez and ended up with a broken finger.

The Venezuelan Foreign Minister posted on her Twitter account saying she regrets such events could occur in an organization that aims to promote regional integration.

Three of the four founding members of MERCOSUR — Argentina, Brazil and Paraguay — have pushed for Venezuela’s suspension, claiming it had failed to comply the Ushuaia Protocol, which restricts membership to countries with “fully functioning democratic institutions,” and calls for sanctions in case of a breakdown of democracy. Uruguay, the other founding member, has not backed the suspension and supports Venezuela's right to a voice within the bloc.

The new right-wing, market-friendly administrations across the region are at considerable odds with the government of Venezuela and its socialist Bolivarian Revolution, accusing the government of President Nicolas Maduro of having political prisoners and undermining democracy.

Caracas has accused the “Triple Alliance” of conducting a coup d'etat against Venezuela and MERCOSUR, adding that the government does not recognize the action and considers it illegal.

Venezuela also insists that it is still the group's rotating president, a position that Argentina, Brazil and Paraguay attempted to block Caracas from taking on at the end of July.  Amid the controversy, Argentina is now slated to take the group’s six-month presidency.

The move to suspend Venezuela from the trading bloc has been criticized as a political move by the right to curtail the socialist country’s influence in the region.

Venezuela entered the bloc in 2012 when most the countries of MERCOSUR were led by leftist leaders.  However, since then a parliamentary coup in Brazil has tilted the scales in favor of right-wing leaders inside the bloc.