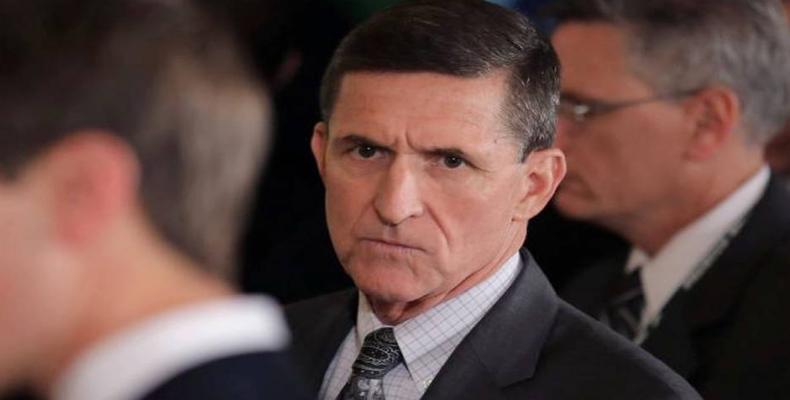 Washington, February 15 (RHC)-- The Washington Post reports the White House is in "full-blown crisis" following the resignation of former National Security Adviser Michael Flynn.  On Tuesday, the White House admitted that Trump knew "for weeks" Flynn had discussed sanctions in a call on December 29 with the Russian ambassador and then lied to Vice President Mike Pence and other top White House officials about it.

The New York Times and CNN are now reporting phone records and intercepted calls show that members of Donald Trump’s presidential campaign had repeated contacts with senior Russian intelligence officials in the lead-up to November’s election.

The Times reports U.S. law enforcement and intelligence agencies intercepted the communications around the same time they were discovering evidence that Russia was trying to disrupt the presidential election by hacking into the Democratic National Committee.  These advisers include Trump’s former campaign chair Paul Manafort and former Trump adviser Carter Page.

During the conference, Spicer also refused to say when Trump became aware of the contents of Flynn’s phone call with the Russian ambassador, saying instead that Flynn had simply lost the president’s trust.

While the White House has acknowledged Trump knew about Flynn’s discussion of sanctions after former Acting Attorney General Sally Yates warned the administration weeks ago, many are questioning whether Trump in fact knew at the very time of the call.

On December 30, the day after the call, Trump tweeted, "Great move on delay (by V. Putin)–I always knew he was very smart!"—referencing Putin’s decision not to take reciprocal measures to expel U.S. diplomats.

On Tuesday morning, President Trump initially responded to Michael Flynn’s resignation by tweeting: "The real story here is why are there so many illegal leaks coming out of Washington?  Will these leaks be happening as I deal on N. Korea, etc?"

Lawmakers are now calling for an investigation.  Michigan Congressmember John Conyers and Maryland Congressmember Elijah Cummings said in a statement: "We in Congress need to know who authorized his actions, permitted them and continued to let him have access to our most sensitive national security information despite knowing these risks. We need to know who else within the White House is a current and ongoing risk to our national security."