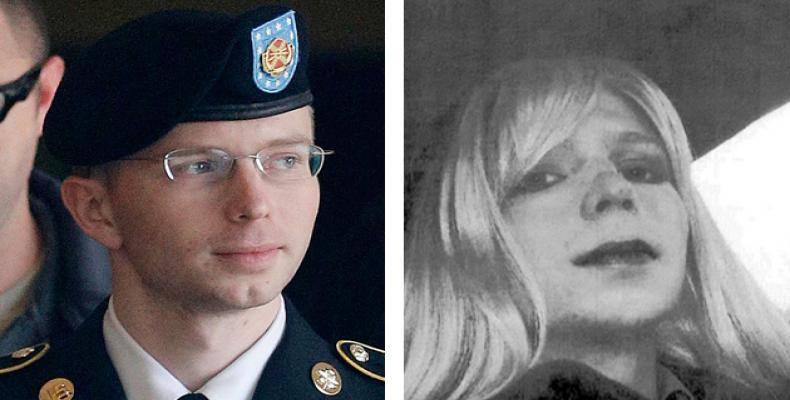 Leavenworth, May 17 (RHC)-- Chelsea Manning, the former U.S. Army intelligence analyst who leaked classified documents, was released from a military prison in the U.S. state of Kansas on Wednesday morning after seven years behind bars.

"I appreciate the wonderful support that I have received from so many people across the world over these past years," Manning said in a statement to ABC News before her release.  "As I rebuild my life, I remind myself not to relive the past.  The past will always affect me and I will keep that in mind while remembering that how it played out is only my starting point—not my final destination.”

Ahead of her release, WikiLeaks announced Tuesday the "Welcome Home Manning" fund, urging people to donate Bitcoin in support of the soldier imprisoned for leaking hundreds of thousands of classified military documents.

ACLU attorney, Chase Strangio told Common Dreams: "The first thing Chelsea always says when we talk about her freedom is that she wants to give back to the trans community — to fight for the many trans people, largely trans women of color, held in custody."

Strangio has focused on making sure Manning's rights as a trans person were respected in prison.  She added that Manning wants "to continue to connect with trans young people; to share our victories and our struggles; to continue to transform the public narrative about what it means to be trans.  She has an unrelenting sense of compassion and justice despite all that she has faced."

The former U.S. Army soldier, who changed her name soon after sentencing, was instrumental in shining light on the atrocities faced by trans people in prison and otherwise.  "And now she will get that first chance.  She will be able to occupy her body, express her gender, navigate the world, share and grow, love and grieve, on her own terms," Strangio said.

In December 2016, the ACLU – along with over a dozen LGBTQ groups – sent a letter to former U.S. President Barack Obama, that garnered 115,000 signatures urging the commutation of Manning's sentence.  Obama commuted her sentence just before leaving office in January.

"Nothing about the coming days or weeks or months will be easy — but they will be hers — and we will love her and support her and give her space to live," the ACLU attorney told Common Dreams.

Ahead of her release in an opinion piece published on the Guardian in February, Manning thanked her friends after her commutation for their undying support.  “I never would have made it without you. Not only did you teach me these important lessons, but you made sure I felt cared for. You were the people who helped me to deal with the trauma of my regular haircuts," she wrote.