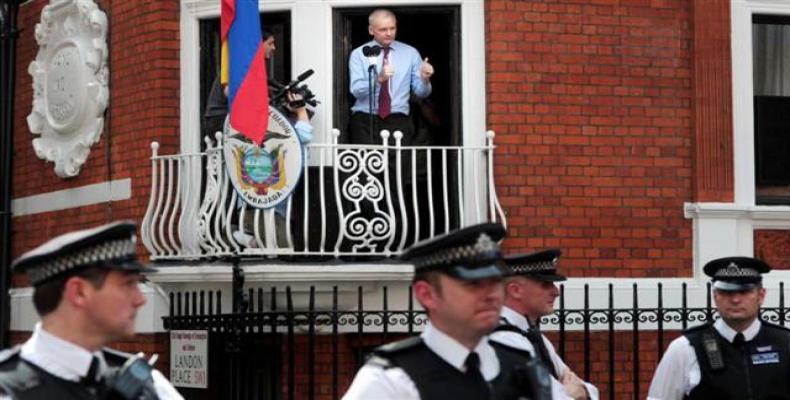 Stockholm, May 19 (RHC)-- Swedish prosecutors dropped the rape investigation into WikiLeaks founder Julian Assange on Friday, saying the investigation had not been able to proceed because of legal obstacles.

Julian Assange, 45 years old, has lived in the Ecuadorean Embassy in London since 2012 when he took refuge to avoid extradition to Sweden over the rape allegations.  He feared Sweden would hand him over to the United States to face prosecution for information leaks as thousand of classified military and diplomatic documents were published by WikiLeaks.

Ecuador's government welcomed the decision by Sweden, but said it was long overdue.  "Ecuador regrets that the Swedish Prosecutor delayed more than four years in carrying out this interview," said Ecuadorean Foreign Minister Guillaume Long.  "This unnecessary delay was despite the repeated insistence from the Ecuadorean government - ever since the granting of asylum in 2012 - that this interview was not only possible but that Ecuador would facilitate its carrying out in our Embassy."

Assange’s lawyer Per Samuelson said the drop of the investigation is a “total victory” for them.  "The preliminary investigation has been dropped and the detention order has been withdrawn, and from Sweden's point of view this is now over," Samuelson told Reuters.

After a 7-year stand-off with Sweden, Assange may still not be able to leave the Ecuadorean embassy.  British police said if Assange were to leave the embassy, it was still their obligation to arrest him.  But the British government has not commented on whether the United States had made a request to extradite Assange.

"Given that the European arrest warrant no longer holds, Ecuador will now be intensifying its diplomatic efforts with the U.K. so that Julian Assange can gain safe passage in order to enjoy his asylum in Ecuador," said Long.