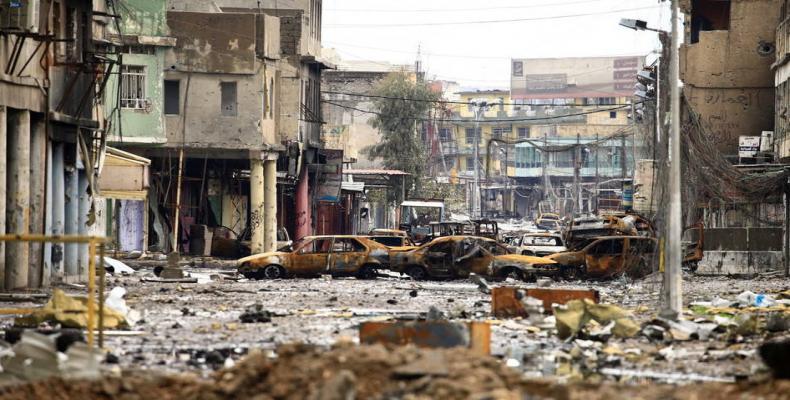 Washington, May 27 (RHC)-- Pentagon officials have announced the completion of an investigation confirming that a U.S. airstrike in Mosul against the Islamic State group killed at least 105 civilians, AFP reported.  The U.S. military maintains however, that the high civilian toll resulted from a secondary explosion of Islamic State group explosives stored in the building.

There are another 36 civilians still unaccounted for, however U.S. Air Force Brigadier General Matt Isler says that these civilians had most likely left the area just before the deadly airstrike.

Although the strike's massive civilian toll had been widely reported, U.S. officials have not formally assumed responsibility for the attack until now, instead only saying that a U.S. strike was “probably” responsible for the deaths.

The deaths occured on March 17, when a U.S. precision-guided bomb struck a building believed to be housing two Islamic State group snipers, in a neighborhood called al-Jadida.  According to the Pentagon investigation, the airstrike detonated Islamic State group explosives stored in the building, and killed over 100 civilians who were either in the lower floors of the targeted building, or in a neighboring building that also collapsed.

Civilian deaths due to airstrikes have become a regular occurance in Syria and Iraq.  Reports have also emerged of at least 35 civilian deaths from an airstrike in al-Mayadin, a town in East Syria held by Islamic State group, according to Reuters.  Although the majority of airstrikes in the Syrian region are conducted by the U.S. led coalition, responsibility for the attack has not yet been confirmed.

Human rights organizations have argued that the number of civilians killed in coalition operations far exceeds the number reported and confirmed by the Pentagon. Reports indicate that last month alone, coalition strikes claimed at least 225 lives, and that the months of March, April, and May have seen the highest civilian casualties at the hands of coalition forces since the beginning of U.S. intervention in Syria in 2014