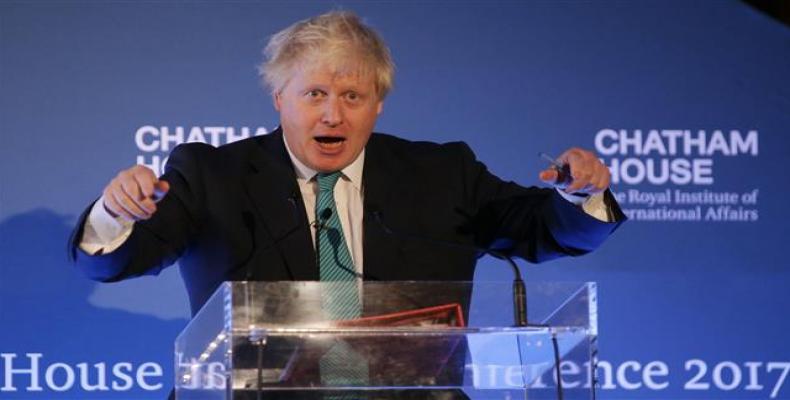 London, October 25 (RHC)-- British Foreign Secretary Boris Johnson has said U.S. military action against North Korea “must theoretically remain on the table” defending President Donald Trump’s attitude towards the country.  “It is the duty of any president of the U.S. given the threat that his or her country could face from a nuclear-armed North Korea, it is the duty of the President at least to explore those military options and keep them on the table,” Johnson said, speaking at an event in central London held by the foreign policy think tank Chatham House.

Comparing the situation to the Cold War, the British foreign secretary said: “The public can be forgiven for genuinely starting to wonder whether the nuclear sword of Damocles is once again held over the head of a trembling human race.”

Trump has taken a tough stance against Pyongyang, threatening to “totally destroy” North Korea if necessary and calling North Korean leader Kim Jong-un a "rocket man" on a "suicide mission."  North Korea has responded with threats, vowing to take the “highest-level” measures against the United States.

In related news, Japan's defense chief has warned that North Korea’s perceived nuclear threat is no routine issue, urging the international community to view it as “unprecedented, critical and imminent.”  Itsunori Onodera said that the growing threat has compelled Japan to agree with the U.S. that all options, including military action, should be considered against Pyongyang.

Onodera's comments came at the outset of a meeting in the Philippines with U.S. Defense Secretary Jim Mattis and South Korea's defense minister, Song Young-moo.   The three met on the sidelines of a gathering of defense ministers from the Association of Southeast Asian Nations (ASEAN).

The Japanese minister it could not be ruled out that a nuclear test by North Korea last month, described by experts as the most powerful test conducted by Pyongyang, was a hydrogen bomb.  "The country has steadfastly improved its nuclear and missiles capability,” he said, adding, "Therefore, we have to take calibrated and different responses to meet that level of threat.”

North Korea has blamed the U.S. for the escalation in tensions, saying Washington’s engineering of crippling international sanctions on the country and its increased military presence in the region have left the government in Pyongyang with no option but to shore up its defense capabilities.