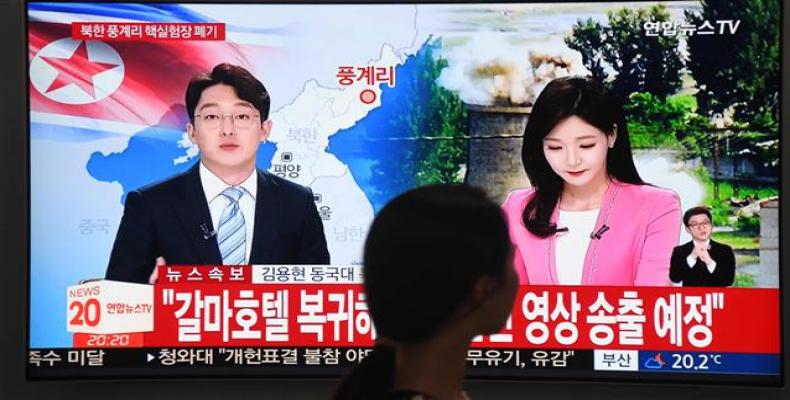 Pyongyang, May 25 (RHC)-- North Korea says it is still open to talks with Washington after U.S. President Donald Trump called off a summit with North Korean leader Kim Jong-un scheduled for next month.

"The abrupt announcement of the cancellation of the meeting is unexpected for us and we cannot but find it extremely regrettable," Kim Kye-gwan, North Korea's First Vice Foreign Minister, said in a Friday statement carried by the official Korean Central News Agency (KCNA).

"We again state to the U.S. our willingness to sit face-to-face at any time in any form to resolve the problem," the North Korean official said. "We had set in high regards President Trump's efforts, unprecedented by any other president, to create a historic North Korea-US summit," the statement added.

The summit was scheduled to take place on June 12th in Singapore, for what would have been the first meeting between an American and North Korean leader.

Trump made the announcement in a letter released by the White House on Thursday having expressed doubts about the meeting taking place as planned when he hosted South Korean President Moon Jae-in at the White House earlier in the week.

Moon's visit to the U.S. was originally arranged as a meeting to fine-tune a joint strategy for dealing with North Korea but instead became more of a crisis session.

The summit announcement came after several months of unprecedented cordial diplomacy between South and North Koreas, which had been adversaries for decades. Moon has been acting as a go-between in diplomatic efforts for the potential holding of the summit between the U.S. and North Korea -- also long-time foes.

The summit's cancellation is a major blow to what Trump supporters hoped would have been the biggest diplomatic achievement of his presidency.