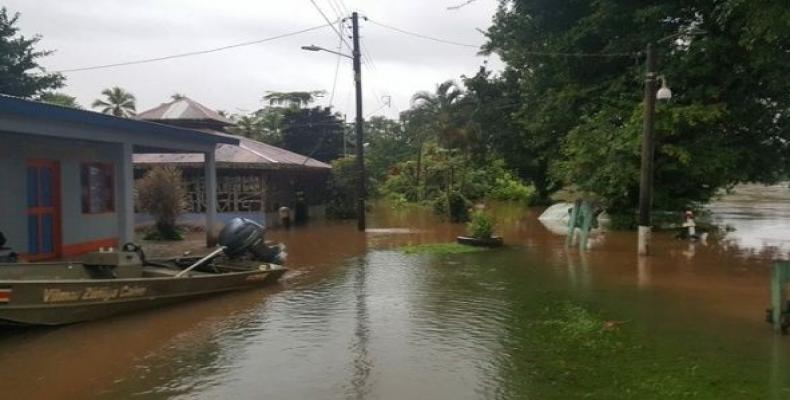 San Jose, July 19 (RHC)-- Heavy rain showers in Costa Rica are reportedly costing the state millions of dollars as one city after another announces a "red alert" amid the continual downfall.  According to teleSUR, nearly 10 million dollars in losses are due to the emergency situation across Costa Rica.

Costa Rica maintains a "red alert" in some regions of the country and awaits the entry of the tropical wave number 17 which may bring even more rain.  Floods and landslides have closed 300 educational centers.

Werner Stoltz, director of the National Meteorological Institute (IMN), told Diario Extra: "We can record that there are records of 350 millimeters accumulated in some sectors, that is equivalent to what can rain in a whole month and we had it in less than 7 hours on Friday night.”

President Carlos Alvarado, accompanied by National Emergency Commission (CNE) official, Alexander Solis, and geologist Lidier Esquivel, stated he will be overseeing an aerial assessment of the damages particularly those surrounding the Sarapiqui River, Matina Rivers, and the Matina Dam, a statement from the CNE said.

“Due to the severe damages in this communities and the forecast of more rains in the Caribbean and Northern Zone, we have intensified the attention and protection of the affected communities,” President Carlos Alvarado said earlier this week.

In a brief press release, the Emergency Operations Session Center assured that emergency teams are still active and are working tirelessly to assist with rescues and evacuations.  Among Costa Rica’s red alert zones are the cantons of Sarapiqui, Turrialba, Matina, and Talamanca.

A total of 16 landslides were registered with the Ministry of Public Works and Transportation.  Over 15 thousand have been affected by the floods, road closures, blackouts, and landslides.  And more than 1,500 have taken refuge in 21 temporary shelters, according to local media reports.