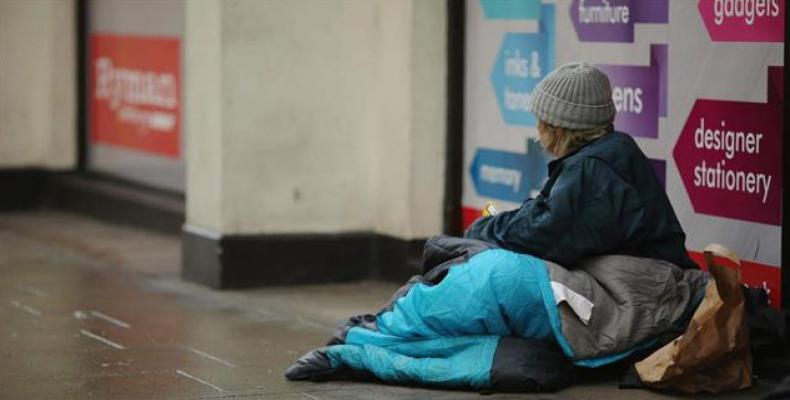 London, August 13 (RHC)-- The number of people sleeping rough in Britain has increased considerably, according to a report, as many blame government cuts to social services as a main reason.  The Guardian said that the problem of homelessness in the United Kingdom was being underestimated by the government, adding that thousands of people sleep rough every night in the country.

It said the number of homeless in Britain had increased by more than 57 percent since 2011, adding that a single charity had accommodated more than 9,000 people in last year alone.  The report said authorities have mostly sought to downplay the acuteness of the crisis, adding that government agencies have strict rules to include people in their lists of homeless and insist people living in encampments are not necessarily in the category.

A new report published in Britain suggests that UK households are becoming poorer and poorer after a decade of austerity.  The report, dubbed Tented Britain: rise in rough sleepers taking shelter under canvas, said encampments had become a feature of the British life and the country was not far from becoming like the United States where tent cities are seen everywhere.

The report cited officials from cities with higher rate of homelessness as saying that a main reason for the crisis was government cuts in social services.  “A lot of this is to do with service cuts, whether that be the NHS, the police, some council services, those support services that were previously there if you had a drug or alcohol addiction,” said Peter Marland, the leader of the Milton Keynes council in southern England.

Marland said those services were in fact in place to prevent people from becoming homeless and sleep on the streets.  He said that "obviously what a lot of those support services were doing is keeping people away from being homeless."