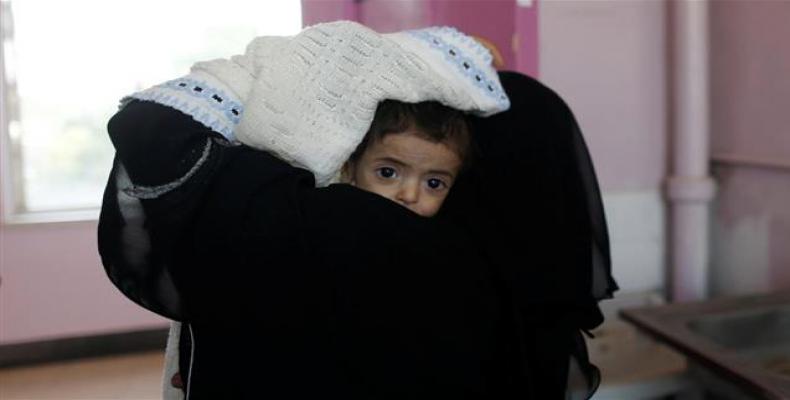 United Nations, September 17 (RHC)-- A representative for the United Nations Children's Fund (UNICEF) says the ongoing conflict in Yemen has made the impoverished Arab country a "living hell" for children.   Meritxell Relano told reporters that more than 11 million children were facing the threat of food shortages, disease, displacement and acute lack of access to basic social services.  “The conflict has made Yemen a living hell for its children,” Relano said. “An estimated 1.8 million children are malnourished in the country.  Nearly 400,000 of them are severely acute malnourished and they are fighting for their lives every day.”

According to Relano, UNICEF has provided over 244,000 severely malnourished children with therapeutic treatment since the beginning of 2018, in addition to micronutrient treatment to over 317,000 children under five.  “The situation of the families without jobs, without income and in the middle of the war, is catastrophic,” she said.

UNICEF has condemned the latest Saudi-led attack on Yemeni children.  “Parties to the conflict are obliged to do absolutely everything possible to protect civilians and civilian infrastructure and ensure people have access to the aid they are entitled to and need to survive,” the statement read.

According to media reports, doctors have weighed toddlers with protruding rib cages and skeletal limbs in a malnutrition ward of a hospital in the Yemeni capital Sana’a.  Twenty children, most under the age of two, being treated at the ward in Sab’een Hospital were among thousands of children suffering from severe malnutrition in the impoverished country.

In mid-November last year, the international charity Save the Children warned that more than 50,000 children in Yemen were expected to die by the end of the year as a result of disease and starvation caused by the stalemated war in the country.

In the latest act of aggression against children, an attack by Saudi Arabia killed 40 children aged from six to 11 who were being taken on a school trip. Eleven adults also died. Local authorities said that 79 people were wounded, 56 of them children.

Some 15,000 Yemenis have been killed and thousands more injured since the onset of the Saudi-led aggression.  The Saudi war has also taken a heavy toll on the country's infrastructure, destroying many hospitals, schools, and factories.  The United Nations has said that a record 22.2 million Yemenis are in dire need of food, including 8.4 million threatened by severe hunger.

Several Western countries, the United States and Britain in particular, are accused of being complicit in the ongoing aggression as they supply the Riyadh regime with advanced weapons and military equipment as well as logistical and intelligence assistance.