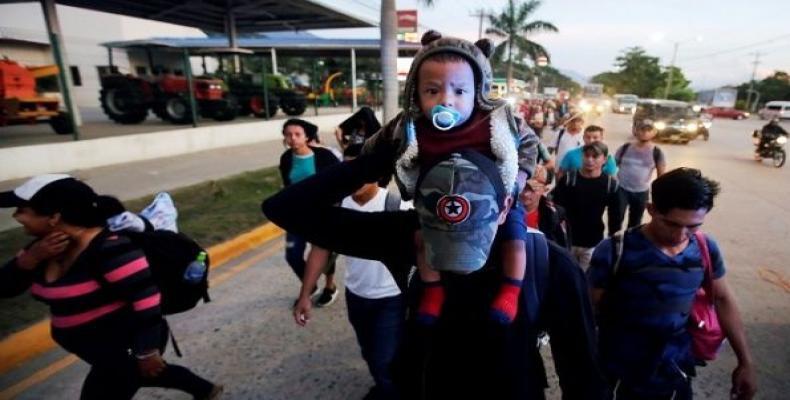 Mexico City, November 6 (RHC)-- The Central American Exodus, or Migrant Caravan, has arrived in Mexico City where the Human Rights Commission of the Federal District (CDHFF) tells local media they have registered 470 Central Americans who are being housed at the "El Palillo" stadium.

Nashiely Ramirez, president of the CDHFF told reporters that more Exodus participants will be arriving in the coming days. "This exodus is going to come in different waves to the city.  We now have 470 people here, 70 percent are male, 30 female (adults) and 17 children,” Ramirez said.

The main portion of the first caravan that left Honduras on October 12th is traveling on foot and hitchhiking through the states of Puebla and Veracruz, east of Mexico City.  The CDHFF president said they are expecting this last part of the caravan to arrive in Mexico City by Wednesday, taking the total number of caravanistas in the capital to 5,000.

The CDHFF, along with the Red Cross of Mexico and the U.N. Human Rights Commission, is providing those in the Exodus with food, shelter, safety and medical care, Ramirez noted.

Inspired by this first caravan, three other waves of migrants have left Guatemala and El Salvador over the past two weeks to escape overwhelming violence and inequality in their Central American home countries.  Most of who have fled are making the dangerous trek to seek asylum in Mexico and the United States.  Caravans two, three and four are making their way through Chiapas and Oaxaca.

While good Samaritans throughout Mexico have taken care of many migrants, human rights violations have also accompanied the caravan through the country, including Mexico’s National Migration Institute.  Over the weekend, armed men took over two vehicles filled with migrant women and children who were traveling through Puebla state.  They haven’t been seen since.